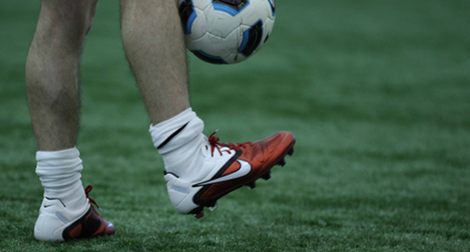 If you’re anything like me, spending big money on a pair of football boots only to have them come off like they’ve been ‘in the wars’ after one game is a bit of a pet peeve.

One of the best things about KangaLite is that it does clean up rather nicely, even on the white areas.

The KangaLite really does stop water getting into the upper too, this means that even after the torrential downpour I played in over the weekend, it hasn’t stopped the CTR360 II from looking close to it’s best.

One real pain in the neck is the new ‘Receive’ pad; with it’s lattice-like structure and tiny bristles, it’s very tough to get it completely clean with just the usual methods! If you want your new cleats looking as good as new, you best have something like a toothbrush to hand!

Having read this far, you’ve probably gathered that I like the CTR360 II an awful lot, but haven’t really mentioned two of the most talked about performance features, the new Pass/Receive area and how the KangaLite holds up in the wet.

I’ve got to say that I prefer the new Pass pad to the old one. Whilst the placement takes a bit of getting used to (it’s closer to the soleplate and an inch or two further back) the firmer TPU gives a really satisfying heft to any pass you play off it – a slightly Concave-esque feel, almost.

The receive pad, however, takes no getting used to. It’s definitely in the right place, nestled in the niche of the foot, and the perfect place to take a ball along the floor onto.

I do think that perhaps it might be a bit of a placebo, as that part of the foot is naturally good for controlling a ball – but as with the ribbing on a Predator, or the Fins on the Laser, it may well help a lot of people focus on where best to control the ball.

One definite winner which I didn’t touch on with the original CTR360 boot test is the KangaLite, having tried out the Puma King Finale back in muddy December, I can definitely say that the CTR360 II feels much lighter in the wet. So if you often find you’re weighed down by heavier leather football boots due to… inclement weather; it may well be worth giving the CTR a run.

If there’s one place that the CTR360 II falls down, for me it’s got to be value. Having tested the Elite version, the price tag that these football boots have to live up to is a lofty £225.

Whilst I think the CTR360 II is an excellent, uncompromising piece of footwear, without knowing whether they’ll last more than one season, I can’t say that they’re worth over £200 of everyone’s money.

For players with a bit of cash, who really want the best money can buy, I think if you look after them and use them on appropriate ground you’re really, really going to love these football boots.

But for everyone else, buying something that’ll be updated in 18 months time might not be worth the outlay (in perspective I could buy a new Xbox360 which would last me much longer and still have enough change to buy the Treqartistas!)

If the ‘standard’ CTR360 II performs anywhere near as well as these ‘Elites’, they’re definitely worth the £130 asking price.

A fantastic example of how to make a crowd pleasing pair of football boots; great to look at, great to wear, great to play in. Are the CTR360 II the best synthetic football boots around at the moment? They’re up there. Are they the best that Nike make? For my money, Yes. 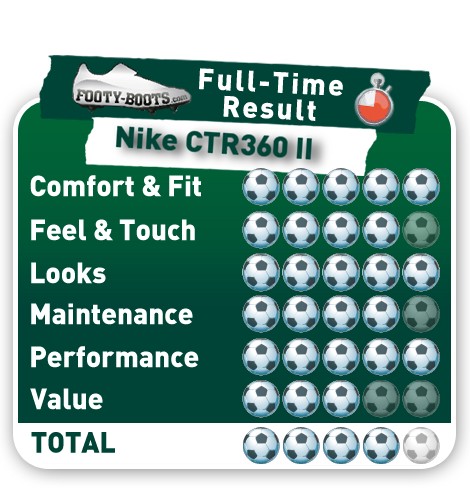