Despite a gut-wrenching last minute winner from Lionel Messi to deny Real Madrid the Spanish Super Copa on Wednesday night, Cristiano Ronaldo had cause to have a small personal celebration as he racked up his 100th goal for Real Madrid, in all competitions and friendlies.

We thought it would be a fun retrospective to see the football boots that CR7 has worn along the way to this staggering milestone! 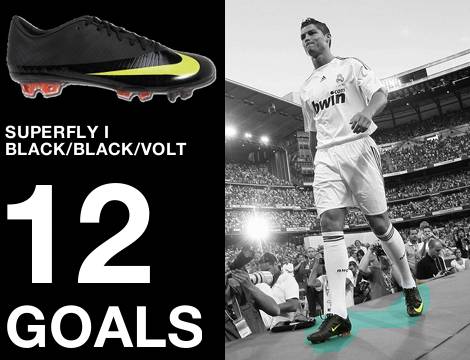 The original Mercurial Vapor Superfly were the football boots Cristiano Ronaldo was presented to the Madrid faithful in, and he stuck with them for the first 5 months of he Bernabeu career.

Starting with his debut against Shamrock Rovers, Ronaldo also notched up his very first Madrid goal in them against LDU Quito and his first La Liga goal from the penalty spot against Deportivo. 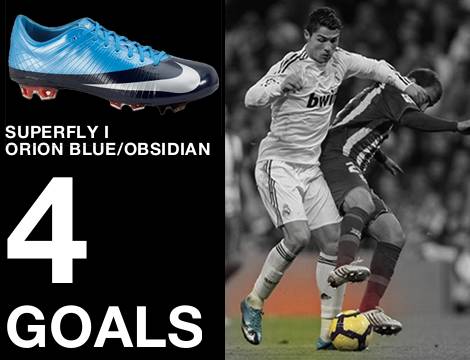 Ronaldo then swapped Superfly I’s in December 2009 for Madrid’s clash against Almeria. Despite only wearing them for around 7 weeks, CR7 notched up 4 goals in this classic colourway – even more impressive when you consider La Liga has a winter break! 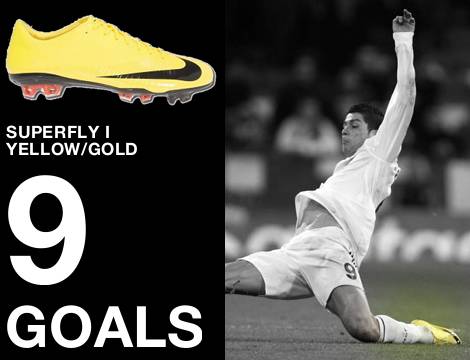 A new year, meant a new colourway for Cristiano as he took to the pitch against Malaga in the Yellow/Gold/Black Superfly I on January 24th 2010.

This was one of our favourite colourways of Nike’s signature speed football boots, and the Portugal captain seemed to enjoy wearing them, too – smashing home 9 goals in exactly 2 months. 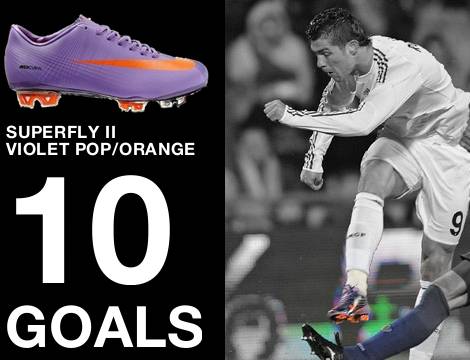 Hyped to high heaven, the Superfly II had one of the biggest launches in' football boots history as the man himself came over to London to take over Battersea Power Station and celebrate all things speed.

Many fans were sceptical about Nike’s latest cleats, but Ronaldo put the doubters to rest when he bagged a brace against Getafe wearing them for the first time. Though thanks to the poor pitch conditions, Ronnie did swap back to some SG Superfly I’s at half time, but failed to score in the second half. 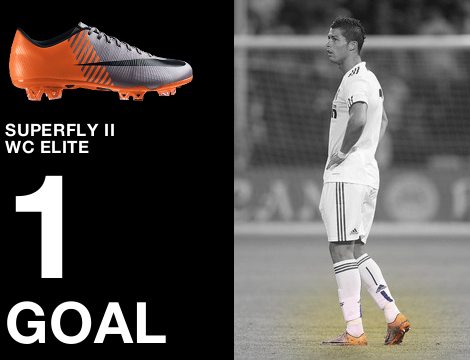 Despite being the World Cup colourway, Ronaldo played a pre-season game against Club Am'rica in the infamous Mach Purple/Max Orange colourway.

It didn’t last long though, as the Ronaldo ditched them after scoring only one goal in them. Interesting, considering players like Alex of Chelsea still play in their World Cup football boots, a whole year later! 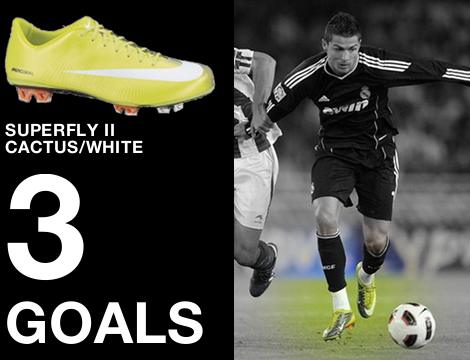 Whilst the colourway will have filled Ronaldo with nostalgia for the Mercurial Vapor IV, the Cactus Superfly II didn’t exactly prove congruent to happy hunting for the tricky forward.

Thanks mostly to an injury, Ronaldo barley played in the Cactus-coloured cleats, and of the 3 goals he did score in them – one is still debated today as to whether it belongs to Cristiano or defender Pep' – who was clipped by one of the ex-Manchester United man’s trademark free-kicks as it sailed in! 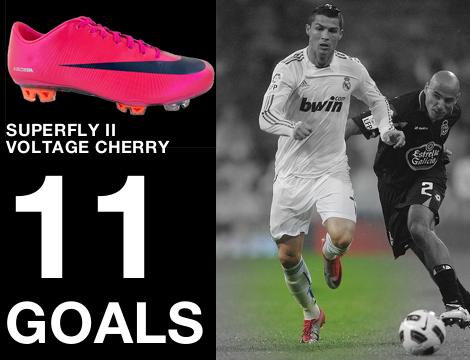 Despite playing in them for just over a month, Ronaldo rocketed back from injury'  to score 11 goals in the Voltage Cherry Superfly II!

Ronaldo’s red-hot form saw him rack up a ludicrous 8 goals in 3 games from the end of October, including an unforgettable 4-goal haul at Racing Santander. 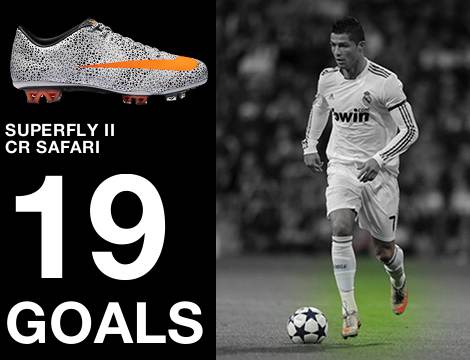 Some say it’s was a move that was long overdue, but Nike finally rewarded Cristiano Ronaldo with his won signature football boots with the launch of the Superfly II CR Safari in November 2010.

Ronaldo enjoyed a bumper festive season in them, helping himself to a hat-trick against Athletic Bilbao and braces over Valencia and Getafe – though his time in the Safari was marred by that 5-0 defeat. 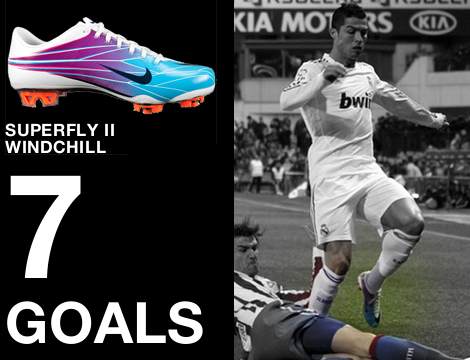 Whilst many expected Madeira-native to stay in the Safari for the rest of the season, Nike revealed that their marquee Mercurial man would once again be switching football boots.

Just about every other Superfly II wearer adopted the Black/Circuit Orange colourway, but Ronaldo was once again allowed his own colourway – this time the stunning Windchill/Chlorine Blue Superfly II. 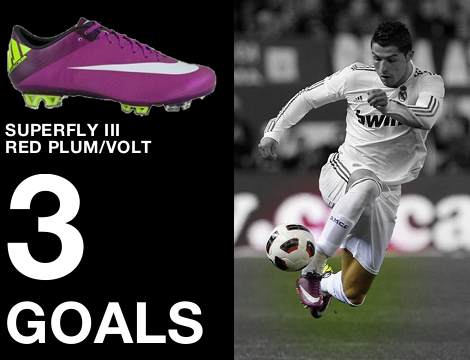 With Nike keen to promote their latest football boots, Ronaldo was denied a signature colourway for a month as he jumped on the Superfly III hype-train.

Ronaldo was rested for several games during the Superfly III‘s launch month as Mourinho was keen to keep Real in the hunt for three trophies, but that didn’t stop him coming off the bench to round off a 3-0 rout of Athletic Bilbao and score in both the home and away legs of Los Blancos’ quarter final tie with Tottenham Hotspur. 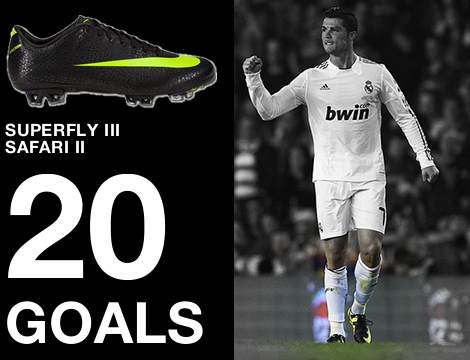 Since debuting them in a 1-1 draw with Barcelona – in which the Portuguese scored a Penalty – Ronaldo has gone on to score the winning goal in the Copa Del Rey final in the sleek black cleats and tally up a ludicrous 11 goals in 4 games as Real Madrid ran in the 2010-11 season.

After such exemplary form in the Safari II, it’s little wonder Ronaldo was keen to keep them on his feet – seemingly delaying the debut of the new Superfly III colourway in Los Merengues colours until the Spainish Super Copa.

It was in that game -and in these' football boots -'  that Ronaldo ratched up his 100th Real Madrid goal in only 2 seasons (and 3 pre-seasons), and bringing our retrospective full-circle.

Ronaldo has debuted 11 colourways whilst playing for Real Madrid, and 1 for Portugal (the World Cup Elite)

When debuting those 11 colourways, Cristiano has scored on 7 of those occasions – no wonder Nike love him so much!

The shortest time Ronaldo has spent in a pair of' football boots is 1 month, 4 days (Voltage Cherry) and the Longest is 4 months 21 days (Superfly I – Black/Volt)

Written By
Kyle Elliot
More from Kyle Elliot
The latest release to come out from Japan; we put the Mizuno...
Read More