A lot of us football boot enthusiasts – myself included – love to debate over boots and their manufacturers, and much time has been spent examining and arguing over which ‘brand’ is king.

Now, imagine a game where players were not divided by club or country, but instead by their allegiance to their boot manufacturer. A one-off game, or perhaps a tournament, to decide the best boot company based on the athletes which have chosen to support that ‘team’. Who would the companies choose to field in such an important game?

This week on ‘From The Sole‘, I decided to have a go at arranging three Fantasy XI’s (as we love to do around here) based on such requirements. I gave heavy-hitters adidas and Nike their own squads, and also put together a ‘world brand’ side that encompasses the rest of the boot makers: Puma, Lotto, Mizuno, Umbro, Reebok, Diadora, Kappa, Lotto, and Under Armour.

The results were naturally three very impressive squads that I attempted to pick with teamwork, technique, and chemistry being the most important factors.

Team adidas – aka the ‘Triple Stripes’ 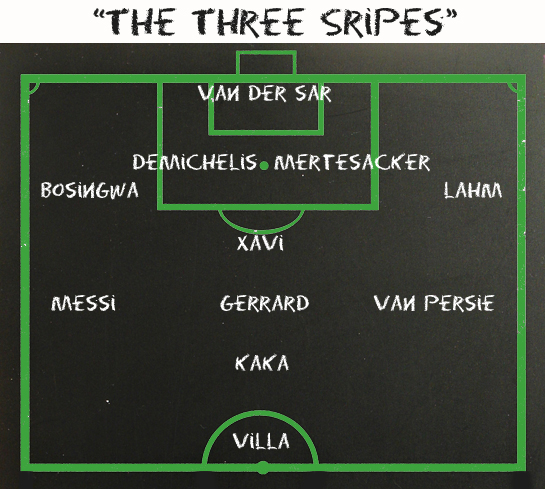 Defense: Edwin gets the nod over Petr Cech, who’s seemed shaky at times for Chelsea in 08-09. The monstrous 6’6″ Mertesacker is chosen at the back to dominate in the air. Lahm, a promising (and already world-class) wingback, and Bosingwa, who had a great season with Chelsea, are also chosen along with the experienced Demichelis.

Mid/Attack: A passing based offence is coordinated by maestros Xavi and Gerrard, the latter of which can add a lot to the attack in the final third as well. Van Persie plays best when surrounded by other talented individuals, and will provide a strong left-footed cross while Messi terrorizes the right side with his dribbling abilities. Kaka’s crafty touch and Villa’s merciless finish round out a deadly and tactical attack.

Why? Lampard is excluded, as he can’t seem to find the right rhythm with Gerrard when they play together. Ballack too is left out, as I don’t feel he’d fit in as well with this passing-based flow. I chose Villa over Higuain, as I think Villa is a little more accomplished.

Team Nike – aka the ‘Check Marks’ 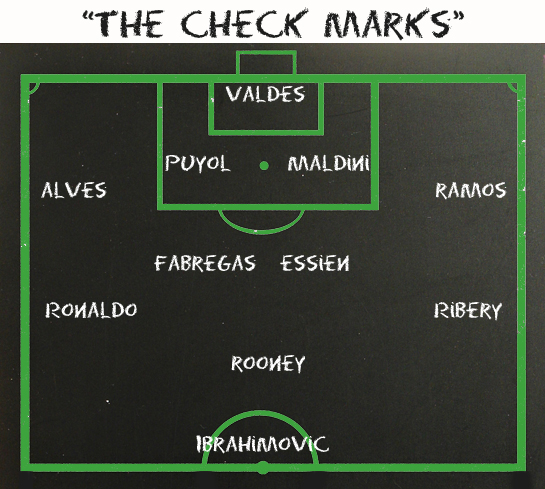 Defence: Valdes squeaks by Almunia as first-choice keeper, though both have made some great last-gasp saves this season. Pace dominates on the sides, where Ramos and Alves can overlap with the attack all game long. Experience, grit, and speed are both in Maldini and Puyol; Maldini may be a controversial decision, but even at his older age he’s showed his class for Milan.

Mid/Attack: Nike’s prolific offensive talents allow for a 4-3-3 option that still is able to maintain a strong midfield presence. Playmakers Fabregas and Essien are perfect for recapturing the ball and sending an inch-perfect pass to one of the three up front. Rooney’s two-way versatility makes him ideal to help out in the middle, while Ribery and Ronaldo add pace and dribbling while being two players who can set up plays just as easily as they can finish them. Despite Ibrahimovic’s struggles in European play, I couldn’t ignore his killer finishing and I feel his skill would complement this attack perfectly.

Why? Robinho and Torres miss out as I feel they don’t have the playmaking to match their finishing. Barzagli deserves to be in the centre of defense after a fantastic season with Wolfsburg but I gave it to the older Italian based on experience. Iniesta and Toure also give way to the (in my opinion, better-defensively) Essien.

Worlds Team – aka ‘Everything Else’ 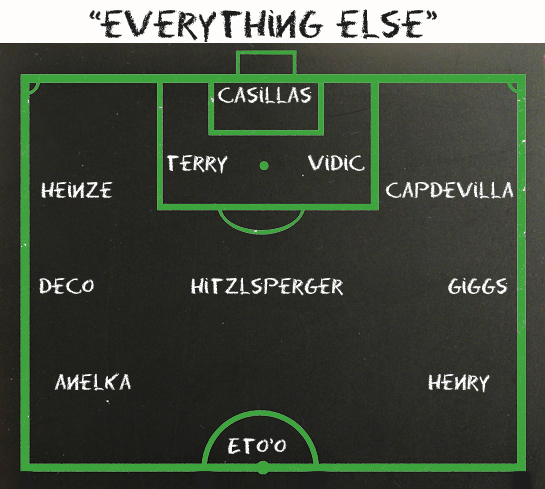 The candidate pool for the world brands was still strong, despite missing some of football’s biggest names. An outstanding central defence is flanked by experienced veterans, and the three midfielders provide technique and playmaking to the Barcelona-inspired attacking trio.

Defensively, the squad is made up of a strong Premier League inspired centre, while the two full backs have loads of quality, though I realise that I’m asking Heinze to play out of position. Mind you, having learnt to speak Welsh, I’m certain he can do pretty much anything!

In attack, I like the technical skill offered by Deco, the experience and vision of Giggs, and the power from Hitzlsperger. The front three have pure finishing prowess. Eto’o and Henry (coupled with Messi) accounted for a century of goals at club level in the past season along with Anelka, the Premier League’s top scorer for 2008-09.

Why? I chose Casillas over Buffon for the sake of recent form. Rossi still needs experience, and Toni doesn’t have the pace to fit in with my attacking formation. The others would make strong candidates for bench players, but weren’t better than the starting eleven choices to warrant inclusion.

So, those are my 3 squads. What do you guys think? Please leave a comment below and let us know your thoughts.

Written By
Felipe
More from Felipe
Goalkeepers have been wearing some pretty outlandish coloured kit for a few...
Read More