To achieve this, the internal boot chassis was transitioned to the plate, leaving only the sock liner between the foot and the Zoom Airbag for maximum effect.

“We started with a full-length Zoom Airbag and visualized what it would look like if the Airbag kept growing up the sides and enveloped the boot,” says Jeongwoo Lee, Senior Design Director, Nike Football. “This led to the creation of an upper so translucent, varying the hues of the internal sock liner drastically impacts the external appearance of the boot.”

The Zoom Air bag is visible – and in one area, exposed and touchable – underfoot. In honour of the 20th anniversary of Zoom Air, “20 Zoom” appears on the heel counter. In addition to being one of Nike’s signature innovations, Air is also among the most sustainable.

For the first time in football, the boot also features a Nike Flyprint upper which is Nike’s first 3D-printed textile upper in performance footwear and debuted on the Nike Zoom Vaporfly Elite Flyprint, worn by marathoner Eliud Kipchoge.

Nike Flyprint uppers are produced through solid deposit modelling (SDM), a process whereby a TPU filament is unwound from a coil, melted and laid down in layers. The Flyprint method allows designers to translate athlete data into new textile structures. 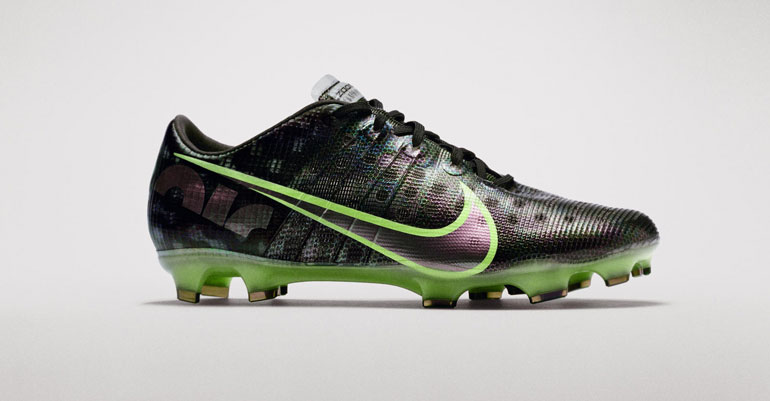 One benefit of 3D textiles over traditional 2D fabrics is the increased dynamism made possible by adding an interconnection beyond a warp and weft; an advantage of Flyprint textiles comes in the fused nature of the material. The Air Zoom Mercurial’s Flyprint upper is lighter and more breathable than Nike’s previously employed textiles, while still coated with All Conditions Control (ACC) to battle the elements.

Nike’s computational design ensures the upper is reinforced in the right areas with a fine-tuned Flyprint pattern unique to football. The Air Zoom Mercurial is also equipped with Flywire cables for additional structure and support.

But the 4.5mm Zoom Airbag remains the boot’s focal point, albeit with a purpose vastly different from experiments of old. In this modern iteration of football Air, it’s not about cushioning so much as responsiveness.

“In the past, there was a lot of focus on cushioning the heel, but Mercurial players don’t play on their heels,” notes Lee. “The players we designed for are taking off from their forefoot at full speed, repeatedly. That’s why we focused on providing a thin, full-length Zoom bag that can best be defined as snappy. You don’t squish into it so much as propel off of it.”

“The Air Zoom Mercurial is a glimpse into the future and where we could take things,” concludes Lee. “With innovations like Air and Flyprint at our disposal, as well as those things still under development, there’s no limit to what football boots can become.”