Baltimore-based baselayer giants Under Armour are set to release their lightest football boots yet in the form of the Under Armour Blur Carbon III. 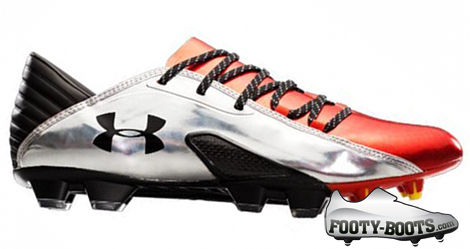 It’s fair to say that the Under Armour Blur series has had a fairly underwhelming player uptake – despite Under Armour’s growing roster of players, almost all opt for the Hydrastrike II or 10K Force Pro II.

Whilst we actually like the Blur series and it’s focus on lateral stability and player comfort, we can certainly see why many professionals would shy away from it’s unusual shape, FG-only soleplate and 243g weight – a little on the heavy side for a ‘speed’ football boot.

At 177g, the Blur Carbon III is comfortably amongst the lightest boots on the market, sitting alongside the Mercurial Vapor VIII, evoSPEED 1 and Mizuno Morelia Neo in at a fraction behind the 165g benchmark of the adiZero and 158g of the Pele Sports Trinity.

How have Under Armour achieved such a drastic weight drop for the third incarnation of the Blur? As always, it’s in the material choice.

Starting with the upper, UA employ microfibreELITE for a super-thin, super flexible feel and fit. Under Armour have also gotten rid of a traditional tongue, instead opting for a wrap-around design similar to the Predator_X.

As you could probably have guessed by the name, the Under Armour Blur Carbon III also packs Carbon Fibre into it’s construction. Forming the core of the new X-Spine soleplate, the Carbon Fibre supports the heel and midfoot for superior support and power retention when striking and making sharp lateral movements.

Whereas many boots have used the space age material in the past to provide elastic return under the toes, the Blur Carbon III seems to use it more like the Umbro Stealth range did, leaving the forefoot as high-density TPU for flexibility and comfort.

Under Armour have also opted for a more traditional stud pattern, in comparison to the ‘outrigger’ studs of the last two Blur Pro’s. Five conical studs support the toes for quick ground penetration, whilst the heel – and interestingly, the outside of the foot – boast more oval-shaped studs for superior support,

As you’d expect from Under Armour, the UA Blur Carbon III somehow packs all the comforts of the last two boots into it’s 177g weight point, with 4D moulded foam creating a perfect footbed, and a Micro G antibacterial later to reduce odor and improve hygiene.

With it’s super-low ground clearance, side-offset lacing, impressive weight and hefty list of features, the UA Blur Carbon III could prove to be a strong favourite – particularly in this Red / Silver / Black colourway.

But don’t start reaching for your wallet just yet, Under Armour won’t be releasing these cleats until January, when they’ll retail at €200 – making a £160 UK Pricetag likely.

Are these UA’s best boots yet? Let us know in the comments!

UNDER ARMOUR TO RELEASE BLUR CARBON III, 8.2 out of 10 based on 52 ratings https://www.footy-boots.com/wp-content/uploads/2012/11/under-armour-blur-iii-featured.jpg

Written By
Kyle Elliot
More from Kyle Elliot
Warrior's Skreamer II is kitted out with a clean new look for...
Read More