After first showing off the Magista, then the new Superfly Nike have finally unveiled the four football boots their athletes will be wearing at this summer’s World Cup in Brazil.

We’ve seen plenty of sneak-peeks from the Nike innovation summits in Madrid and Barcelona, but with the Champions League Final out of the way, Nike are pressing forward with their mission to make Summer ’14 the year football boots changed forever.

There’s no shortage of coverage on the new Magista and Mercurial Superfly across the site, so we won’t go into too much detail on those – however, it’s no surprise to see the Nike World Cup football boots fall into line with the pallet set out by those two groundbreaking boots.

The Hypervenom and Mercurial come in Hyperpunch Red and Gold, with the Tiempo and Magista arriving in Volt Yellow and Gold.

Both Volt and Hyperpunch are incredibly stand-out on the pitch, whilst the Gold employed on the Swooshes are a representation of the rewards of victory.

The Hypervenom will be providing attacking agility and finesse for England frontline Wayne Rooney, Daniel Sturridge and Danny Welbeck, not to mention Brazil’s golden boy Neymar and US favourite Clint Dempsey.

Using a NikeSkin upper that blends synthetics, mesh and ACC All Conditions Control, the Hypervenom gives forwards the edge with a combination of control and responsiveness. 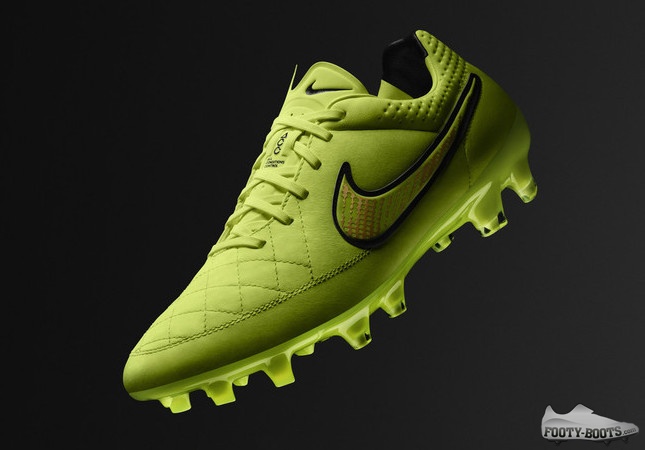 Tiempo continues it’s World Cup presence after making it’s presence felt way back in 1994 with masterful touch all over the park; from Defenders like Sergio Ramos and Gerard Pique to timeless midfielders like Andrea Pirlo, the Tiempo Legend V melds old-school style with modern tech.

A K-Leather forefoot meets a Kangalite midfoot and heel, so touch is assured but water uptake is reduced. Inside the boot, a hydrophobic mesh keeps water and sweat away from the foot for constant comfort.

“This has been an unprecedented year of innovation for Nike Football. We believe that, as with the Mercurial R9 worn by Ronaldo in 1998, 2014 will be remembered as the year Nike changed football boots forever,” said Nike Football's Design Director, Denis Dekovic.

“The colors are bold, but not as bold as the ideas and innovation in these boots. We cannot wait to see all the players on pitch in these new boots,” added Dekovic.

Drop us a comment and be sure to let us know!

Written By
Kyle Elliot
More from Kyle Elliot
Latest stats suggest that this season's newly-promoted sides are the deadliest yet!
Read More