It’s not often that you’ll find us talking about boots from outside of football (‘Footy’-boots, see? There’s something in the name) but our friends at adidas mentioned that as well as the new adidas F50 adiZero Prime, they were releasing a Rugby version for the world to oggle over too! 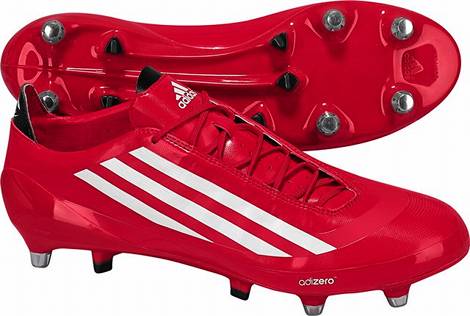 The RS7 takes all the elements that made the adiZero such a successful pair of football boots and added some rugby specific extras. As it stands the adidas adiZero RS7 are the lightest Rugby boots on the market.

Here are some of the features that make it a record breaking piece of technology:

* Upper: SPRINTSKIN crafted upper. SPRINTSKIN is a revolutionary single-layer synthetic for that incredible wear and reduced weight. This, along with TPU support bands, sprint frame exchangeable screw-in studs and aggressive colors, will dominate the rugby pitch.
* Specs: Synthetic print added to medial forefoot is to increase control when kicking. The TPU bottom frameframe reinforces the upper and prevents abrasion in the kicking area. Inlay is crafted with the ultralight sockliner in the shoe.

* Heel: Includes a Synthetic Print on the inner lining of the heel to help prevent slippage issues. This makes the boot easy to break in and secures a great fitting cleat. 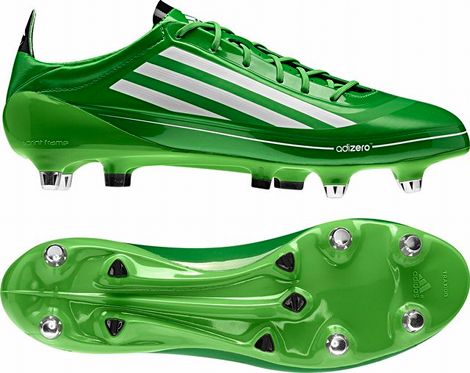 adidas has used a Sprint frame for the RS7 Pro boot that is 50% Lighter than all other regular TPU Outsoles. Strong and Permanent midfoot support for stabilty and also helps injury prevention through lightweight hollow core construction.

The sole features a mix sole plate using the rounded studs and Moulded studs. This has been added for maximum traxion without increasing the weight of the Boot.

All in all, the adidas adiZero RS7 sound like they have more in common with the older adiZero than the new adiZero Prime, e.g. the lack of adiTwin Light and sticking with SprintSkin.

The RS7 was released in two colourways; Red/White and Green/White – which will make a really bold statement on the pitch – simple bold colours have often proven to look the most outstanding on TV cameras. Finally the cost of these specialist Rugby boots is £140.00 – making them the same price as the newly revamped adiZero, and significantly cheaper than the adiZero Prime.

Written By
Kyle Elliot
More from Kyle Elliot
PUMA kit out another of their big name players with a pair...
Read More