Even though the times are a-changing, adidas have rolled back the clock with the release of the latest adidas Predator LZ colourway – Black/Red/White.

Harking back to the same palette that made the Predator a household name back in 1994, the adidas Predator LZ – Black / Red / White is the perfect tonic to those a little weary of the bright colours that have become the standard in the Predator range as of late.

Whilst not quite the return of a red tongue and three white stripes, the entirely black and red upper takes us back Steven Gerrard’s Blackout Predator Pulse from 2004-05, with only the white soleplate to brighten things up a bit.

As with other recent LZ releases, adidas have opted for two colours to highlight the Lethal Zones of the boot, with Drive, Pass and First Touch kept low-key in the same black as the upper, whilst the Dribble and Sweet Spot are picked out in Red.

So, with their decidedly old-school flavour, adidas are giving this colourway to one of the Predator’s most loyal servants to debut.

To mark his 100th cap, Steven Gerrard will be the first player to wear the adidas Predator LZ' – Black / Red / White' in a match, as England take on Sweden in a friendly international tonight. 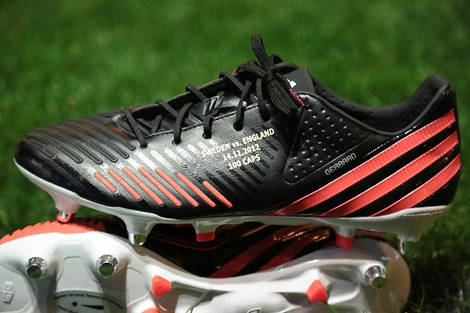 Gerrard has always made a point of preferring black boots to the more visibile colourways on the market today, so we imagine the Liverpool skipper wil be delighted to lead England out in this suitably smart design, crafted in his customary 9.25 size, from adidas.

To commemorate the occasion, adidas have also customised Gerrard’s pair with some special gold printing on the upper, with the match details and date placed just below the laces. 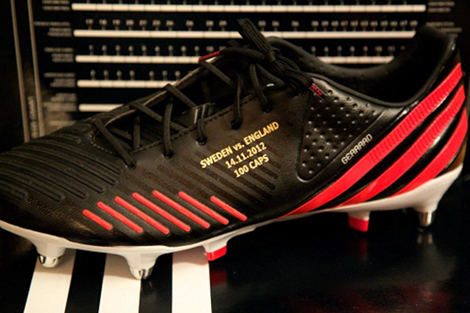 When thinking of Predator players and 100 England caps, one can’t help but remember David Beckham’s spectacular golden Powerswerves from 2008 – if ever there was a comparison that defined these two England greats, it would be that of their choice of centennial football boots.

What do you think of the adidas Predator LZ' – Black / Red / White?

GERRARD – PREDATOR LZ – BLACK RED WHITE, 8.7 out of 10 based on 62 ratings https://www.footy-boots.com/wp-content/uploads/2012/11/adidas-predator-lz-black-red-white-featured.jpg

Written By
Kyle Elliot
More from Kyle Elliot
It's here! The new campaign is merely hours away, and we've got...
Read More