Chelsea players Michael Ballack and Petr Cech have publicly admitted that they would like interim boss Guus Hiddink to stay at the club beyond the end of the current season. 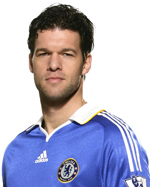 As things stand, Hiddink will return to his role as Russia boss in May. However, considering the excellent start he has made to life at Stamford Bridge, many have started to speculate whether he could stay on a permanent basis.

Chelsea midfielder Ballack has revealed that he would ‘love for him to say he is staying for three years’ because all of the players feel that he is a ‘great manager’.

Since taking charge of the team following Luiz Felipe Scolari’s departure, Hiddink won his first six games as Chelsea boss. The seventh and most recent game in charge was the 2-2 draw in Juventus that ensured they qualified for the last eight of the Champions League.

It is obvious to everyone that Hiddink has had a positive impact on proceedings at Chelsea. Adding to his previous comments, Ballack revealed how the Dutchman has had a ‘big influence’ on the team in such a short space of time.

Another Chelsea player to come out and praise Hiddink is Petr Cech. The Blues keeper admitted that ‘we want him to stay’ and that everyone will have to ‘wait and see what happens’ in the summer.

How likely is a permanent role for Hiddink though? Every time he has been questioned about the situation, he has insisted that it remains a short-term agreement.

However, the Russian Football Union appear to have hinted that something could be arranged by the summer. A spokesman for them said that Chelsea ‘are the kind of side that any coach would like to manage’. Then, they admitted that ‘everything can change’ as far as Hiddink’s future goes.

There is a feel good factor around the club at the moment and the players are enjoying life under their new boss. The longer this goes on, the more likely it is that Hiddink will be the Chelsea manager at the start of next season.

Written By
Felipe
More from Felipe
With only nine games to go La Liga is red hot. Real...
Read More