We’ve all seen our favourite players in training with those black ‘GPSports’ vests on – tracking and processing data about a player’s movement; well, Under Armour think they’ve come up with something even better! 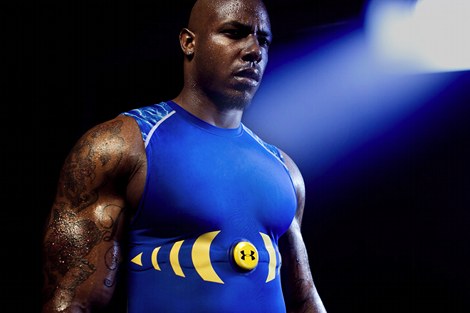 Dubbed the E39, the hight-tech baselayer is going to be used on between 10 and 30 athletes in the NFL combine this weekend.

For those not in the know, the combine is a series of drills and exercises where prospective young college stars go to impress the coaches of the professional NFL teams, with staff on hand to measure vital stats like vertical jump height, top speed and strength.

Under Armour’s E39 aims to enhance the wealth of data available to combine applicants, staff and coaches by using several awesome pieces of technology to give the most in-depth performance readings and insight into the physical condition of the athlete wearing them.

Weighing less than 4.5 oz (2kg) the E39 is made from the same material as the rest of the company˘ line of compression-based apparel.

But just below the ribcage the shirt also contains a removable sensor pack called a ”bug” that holds a triaxial accelerometer, a processor and 2 gigabytes of storage.

The information collected can be broadcast via Bluetooth to phones, iPads and laptops so that scouts and coaches can view the power and efficiency of each athlete˘ movements. Heart-rate and breathing-rate monitors are placed on both sides of the sensor pack, helping to gather even more intel from the body˘ core.

The triaxial accelerometer inside the sensor pack measures acceleration and change of direction. It breaks down an athlete˘ movements along a vertical plane passing from front to rear that divides the body into left and right sections. It provides a glimpse at how each side of the body is moving in sync ĹĄ or out of sync ĹĄ with the other during a sprint, for example.

Under Amour are currently very proud of their prototypes and can’t wait to see how they go down at the Combine this weekend, after that who knows where the E39 could end up!

Our bet is that Brands like Nike and adidas will be watching this innovation by Under Armour very closely, given their success with products like the miCoach and Nike+.

But more importantly, we could see Top European clubs using devices like the E39 to get a better analysis of their athletes.

What do you think to Under Armour’s latest creation?

Vital sports technology innovation? Or a show of force from the American brand?

Written By
Kyle Elliot
More from Kyle Elliot
Even if you don't have Ă‚Ĺ2500 to buy them, these completely unique...
Read More