According to Castrol EDGE Performance analysis, Andrei Arshavin has seen his form nosedive over the past 12 months, with the Arsenal schemer dropping from 22nd to 779th in the Castrol Rankings. 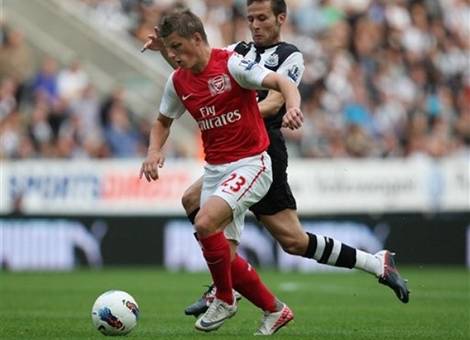 The former Zenit St Petersburg star was at the centre of some controversy in Arsenal’s recent defeat against Manchester United, when the decision to bring him on as a sub for the impressive Alex Oxlade-Chamberlain was roundly booed by an Emirates crowd frustrated by the dramatic fall from grace of their diminutive attacker.

Indeed, since his first season in England, in 2008/09, he has seen his scoring rate, shooting accuracy rate and chance conversion figures all drop, season by season. 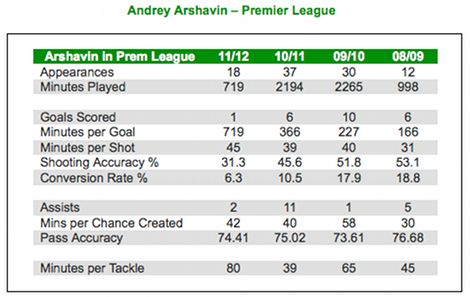 His creative influence has also dropped from last season, with the 30-year-old creating fewer chances on average. While interestingly, the stats also back up a feeling amongst many other fans that Arshavin’s work-rate could be better, with the Russian captain challenging for far less tackles this season.

But the question remains, can the playmaker revive his flagging career in north London or is he destined to leave the Premier League before the beginning of next season?

According to Castrol EDGE Performance analysis, Mikel Arteta has completed 85% of his passes into the final third of the pitch, which is the second-highest percentage in the Premier League this season, only after Manchester City’s Samir Nasri. 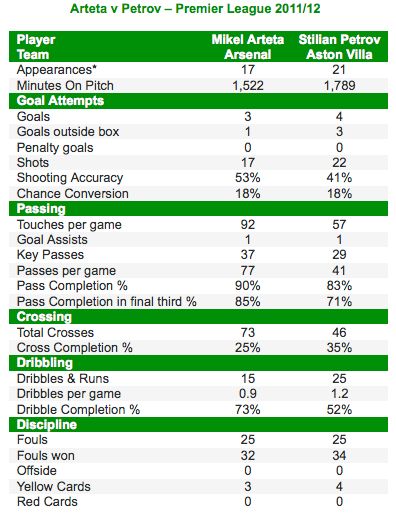 The former Everton player, who is expected to wear the new Puma King SL, surpasses Stilian Petrov in terms of shooting accuracy, passing and dribble completion.

However, the Bulgarian’s powerful shots make him one of the most dangerous players from long range, having already netted three goals from outside the box this term in the Premier League – only England and Man Utd star Wayne Rooney has been more lethal (five).

When these teams last met at the Emirates in the Premier League, Aston Villa emerged with a 2-1 victory thanks to a first-half brace from Darren Bent.

The England forward has 8 Premier League goals to his name this season and in tandem with the pacey Gabriel Agbonlahor could present Villa’s biggest threat when they attempt to counter Arsenal’s possession based game plan. 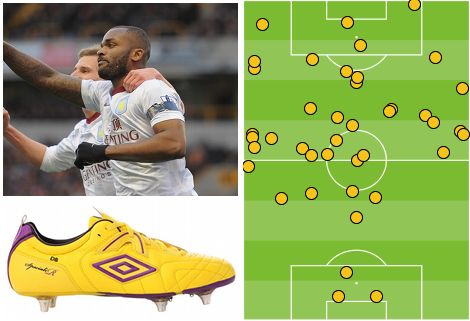 Bent’s finishing is his main attribute and he showed that at the Emirates last season.

The England forward had 45 touches during the encounter (of which only 9 in his own half) but still managed to convert 50% of his shots (2 out of 4).

Surprisingly his 45 touches during that game represented his second highest tally in a league game for Villa last season; demonstrating his ability to stay on the margins of a match, but still score vital goals.