Fancy yourself as the ultimate keen-eyed football fan? Well, if you can pass the ultimate test of ocular prowess – by finding Where’s Wally in a packed Wembley Stadium – then you and a friend could be on the way to the home of English football to watch the Three Lions play! 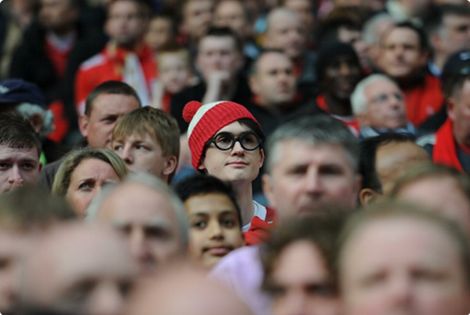 Wearing his world famous stripes Wally is hidden somewhere within the 360 degree crowd shot taken at this seasons FA Cup with Budweiser Final. Keen-eyed fans going online to tag themselves and find friends will have the chance to become Wally Watchers and win one of ten pairs of tickets to the upcoming England v Belgium International game at Wembley if they can spot Wally.

The unique fan photo can be viewed at www.wembleystadium.com/wembley360, and fans that attended the game are being invited to participate in the record attempt by going online and tagging themselves. The current Guinness World Record for the ‘Most Tagged Photograph’ is held by Orange for a crowd shot taken in 2010 at Glastonbury which received over 7,000 tags from music fans.

Aside from staking its claim as the ‘Most Tagged Online Photograph’, the Wembley 360 degree crowd shot is one of the largest images of a major sporting event. Estimated at 27 Gigapixels, the photo has beaten last year’s 23 Gigapixel photo taken at the 2011 FA Cup Final. The remarkable feat of internet publishing saw the image captured and merged into a huge online photo in less than 24 hours after The Cup was lifted.

Chelsea fans who were not able to be at Wembley for their teams moment of glory   can still get closer to the action by visiting www.wembleystadium.com/wembley360 and use the zoom tool to view their heroes on the pitch and spot attending celebrities enjoying the game.

So, hop on over to the Wembley website, and you could soon be joining our Striped soccer supporter at the home of English football!