It’s an event that’s almost as hyped and anticipated as the big-summer tournaments themselves – Nike’s Euro 2012 advert is almost upon us!

Having knocked it out the park with their Ronaldo vs. Nadal ad earlier this year, Nike have revealed the successor to the insanely-popular ‘Write the Future‘ ad from two years ago.

Dubbed ‘My Time is Now’, the message behind the ad is simple; Don’t tell me I have potential – My Time is Now. 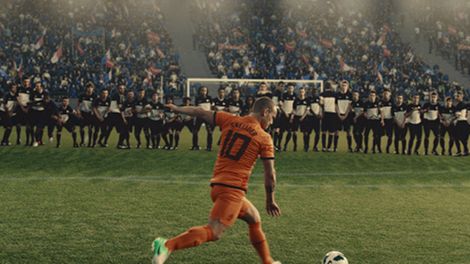 With more star-power than you can shake a goalpost at, Cristiano Ronaldo, Neymar, Javier Hernandez, Gerard Pique and Andres Iniesta stage a pitch invasion of a Holland vs. France match along with hundreds of Nike’s ‘The Chance’ Finalists!

The video blasts along at an electric pace, with more going on than you could hope to catch on a single viewing – as well as streams of players coming in from every angle, stars from other sports making a couple of cameos keep proceedings full of ‘no way!’ moments.

Nike’s ‘My Time is Now’ video also has a special element of' interactivity' to it, to boot!

By heading to the Nike Football Youtube channel, you can watch a special version of ‘My Time is Now’ with 9 breakout sections to find.

By clicking at just the right time, you can get access to a a tour of La Masia, Mario Balotelli’s very special Barbershop, Cristiano Ronaldo’s workout plan and a very special version of one of the most popular videogames ever!

Written By
Kyle Elliot
More from Kyle Elliot
How can a football-specific nutrition and vitamin range benefit your game? The...
Read More