A facial injury to England captain John Terry has added more misery to what has been a turbulent couple of weeks for Chelsea Football Club. 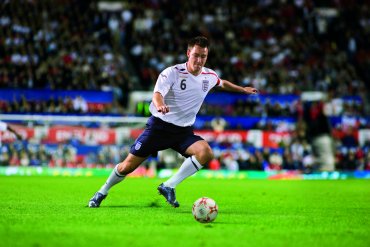 Terry showed his renowned battling qualities to carry on playing until half time, for a goal shy Chelsea team who have amazingly failed to score in the Premiership throughout the whole of September. Indeed, former AC Milan goal machine Andrei Shevchenko has appeared a shadow of his former self, with his Reebok Sprintfit’s again failing to help him hit the target.

Initial worries that England hard man JT could miss the Three Lions crucial Euro qualifiers against Estonia and Russia seem to have receded, with news coming out of the Chelsea training camp this morning that a successful operation coupled with his impressive healing powers may give him an outside chance of playing in the Blues Champions League game against Valencia on Wednesday.

If you would like a chance to win a pair of signed John Terry Umbro X Boot Destroyer’s, all you need to do is vote in the Footy-Boots.com Football Boot Awards in association with Zoo Magazine. Log onto Footy-Boots.com between Tuesday 2nd October and Tuesday 16th October to cast your vote!

Written By
Felipe
More from Felipe
The Chelsea defender reclaims the skipper's armband against the United States tomorrow.
Read More