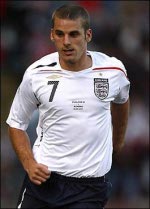 England midfielder David Bentley is almost certain to be a Tottenham player by the end of the day.

Bentley had a medical at White Hart Lane on Wednesday and Spurs have called a news conference for 10 am this morning where they are expected to confirm the move. Additionally, the Rovers chairman John Williams has stated that a £15m deal had been agreed “in principal” for the 23-year-old.

England international Bentley joined Rovers in 2006 and extended his contract last year but made it clear he wanted to move on.

He is now expected to travel to Holland this weekend with his new team-mates to be part of Spurs’ pre-season preparations at the Feyenoord Jubileum Tournament.

Bentley started his career at North London rivals Arsenal before ending up on loan at Norwich in 2004. Another loan spell followed in 2005 at Blackburn before the move to Rovers was made permanent the following year.

Written By
Felipe
More from Felipe
In this post-Christmas round-up of football shirt news we take a look...
Read More