As we’ve mentioned here on Footy-Boots.com, 2010 has truly been the year of the football. The Jabulani was the talk of the whole planet for 6 weeks, Nike secured 10,000 Premier League goals with the T90 Tracer and the FA has retracted one of Umbro’s for being too orange (or something) – but perhaps 2010 might be remembered most fondly for producing the perfect football…

Dubbed the CTRUS, this alien-looking orb is being heralded as the football of the future, thanks to it’s completely unique design.

The first selling point of the CTRUS is that it’s design is completely airless – a first for a football. This design means that the ball never looses any inflation, keeping it at optimum playing pressure.

The airless design also means that the CTRUS is perfect at any altitude,'  which was one of adidas main excuses for the allegedly erratic performance of the Jabulani. 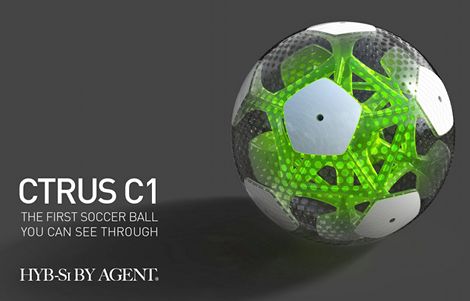 
But if you think a completely airless design is all the tricks that the CTRUS has up it’s sleeve, you’re in for a real surprise!

The mantra behind the CTRUS design is “Fair Play is all about Transparency” – and there’s nothing figurative about that statement!

CTRUS‘s casing is completely transparent, giving you a view of the weird structure that allegedly makes the playable – but the see-through casing isn’t just to make it look good.

At the core of the CTRUS lives an internal CPU processor that serves to do some really impressive – potentially game-changing – things that no ball has done before. 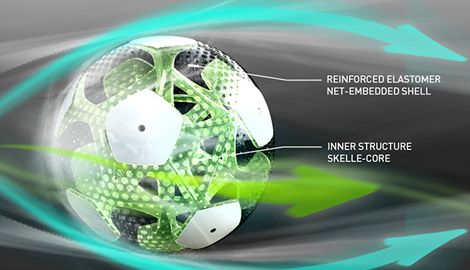 The CPU is able to process information from a GPS locator and Infra-red positioning indicators to all the ball to change colour depending on where it is on the pitch!

The first use of this would be to serve as a (relatively) inexpensive form of Goal Line Technology. When the ball crosses the line or goes out of play, the LEDs in the ball flash or change colour; they could go red when the ball’s out for a throw in – or the whole ball could flash Blue and White if, say, Chelsea score at Stamford Bridge (though if it were used with Chelsea, it’d be a bit of a waste at the moment!)!

Not only would this provide officials and commentators with an extra pair of eyes on the pitch, designers AGENT also claim the ball’s internal CPU can record the force and speed of a kick (we’d finally know whether some football boots let you kick the ball harder than others!) and house an on-board Point-of-View camera (complete with software stabilised image technology) so we can see what the ball sees as it sails into the top corner! 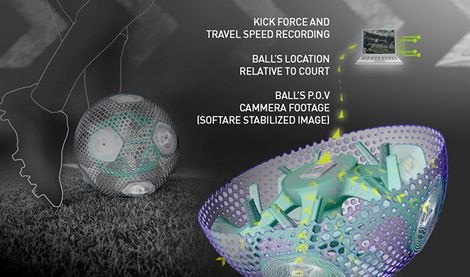 The CTRUS has already scored one goal for it’s designers – by claiming the coveted 2010 Red Dot Luminary Design award – so the potential of this project is clearly being recgnised by some of the higher ups in the design world. 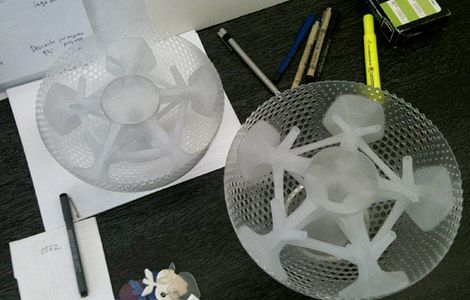 As you can see from the pictures, Mexico-based designers AGENT are passionate about the project and are on the way to building a full prototype.

But what do you think of CTRUS? Having seen Nike and adidas spend decades trying to perfect injected moulded foams, 3D panelling and 360-degree sweet spots, we’re not sure we’d like to play a game with this space-age ball of technology (mostly because we’d break it…) but the thought of an airless ball which changes colour is definitely – for want of a better phrase – freakin’ awesome!

What are your opinions on this amazing concept?

Thanks to Footy-Boots.com Reader James Sawyer for bringing this awesome concept to our attention – and having a name like the bad-ass from Lost, bonus!

Written By
Kyle Elliot
More from Kyle Elliot
It's a double-helping of Samba magic as Neymar & Brazil face their...
Read More