When it comes to getting your football boots seen, even the biggest brands have to try something new and innovative once in a while; which is exactly what Nike & Zlatan Ibrahimovic are doing with their new game to promote the Superfly III! 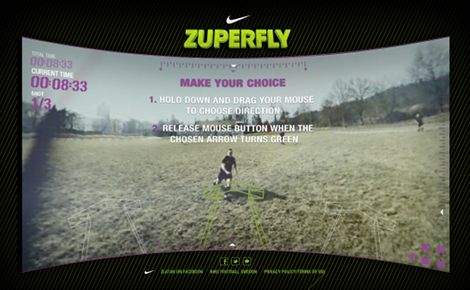 A week or so ago, we brought you a teaser video which showed the big Swedish striker lacing up his Superfly III football boots, and then strapping on an alien-looking harness, with a device that sat above his head on some sort of scaffold.

It turns out that Nike had rigged up the superstar with a state of the art 360-degree camera that tracked Zlatan everywhere he went on the pitch as he took on a group of defenders.

And what did Nike do with such footage? They turned it into a game, of course! Which you can play at

Your challenge is to step into Zlatan’s football boots and make lightning-fast decisions by rotating the camera to point Ibrahimovic in the right direction. After weaving your way through the Tiempo-wearing defence, you’ll have to set the AC Milan forward up for a good position on goal as, though the man himself would never admit it, there are places on the pitch that even the mighty Zlatan can’t score from! 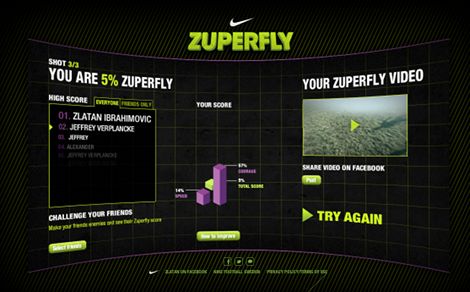 Afterwards, you’ll receive your very own Superfly Rating and some tips to improve it, like always making sure you score, taking the most unexpected route to goal and being as fast as possible when making your decisions.

If your Superfly score is high enough, you’ll get entered into the leaderboard, where you’ll be up against Ibrahimovic himself!

We reckon it’s a great interactive ad for the Superfly III, and a fun little time waster if you’ve got a couple of seconds on your lunch break.

Though, if you’re wondering why our Superfly score is so low, we were trying our best to really ‘be’ Zlatan, and spent over 6 minutes looking for the arrow that would let us get petulantly sent off. Hint: There isn’t one, FIFA this ain’t!