After haranguing his Twitter followers to ‘Dare to Zlatan’ in a multitude of hilarious ways the other week, Zlatan Ibrahimovic was obviously feeling a little daring himself as he showed off what are expected to be the 2014 edition of the Nike Mercurial Superfly.

The PSG striker attempted to start a cuddle-puddle with one of his team-mates, giving the cameras a great angle on the as-yet unseen new version of Nike’s tech-packed football boots.

In the wake of the reveal of the Nike Magista, footballers all over the world have been waiting to see what Nike are going to bring to the table for the Mercurial, which has always had a strong tie to the World Cup, in the Summer of 2014.

Having been hyped up by the ‘Fast Forward’ editions of the Vapor IX, it’s clear that Nike want the new Vapor X and Nike Mercurial Superfly to be at the forefront of everyones mind going into what is sure to be a killer summer for football.

Taking a look at what are on the feet of the self-proclaimed ‘World’s Greatest Striker’ reveals that Nike are looking to bring across several exciting design cues on the 2014 Nike Mercurial Superfly.

The Flyknit construction that has proved so innovative on the Magista used again here on the new Mercurial, with tongue-less design and mid-top silhouette carrying across.

Interestingly, Nike seem to have also called upon a thicker version of Flywire to use in the upper, along with a second layer that wraps around the boot but leaves the instep exposed.

If we had to guess on what that material might be, a thin film that uses the ‘Speed Control Texture’ from the Vapor IX seems a likely point of difference to the new Magista’s NikeSkin. 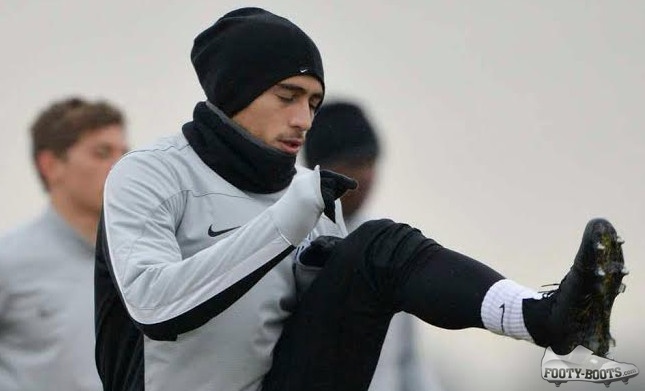 Juventus’ Martin Cacares was another player also to try out the boots in training, giving a great look at the SG-Pro traction plate.

Seemingly carbon fibre in material, this angle also hints that Nike are looking at reverting back to a four-stud heel – an exciting prospect given the mixed view on the two-stud version on the Vapor VIII & IX.

We’d imagine this is due to the ‘Fly’ part of the name now referring to FlyKnit rather than FlyWire.

Is it possible to reboot a boot? Nike just did it.

Spot credit goes to DDChile (as usual), and images are from the PSG Facebook page and Juventus Facebook Page respectively.