Nike have sued Adidas over a Chinese footballer’s endorsement contract in China. 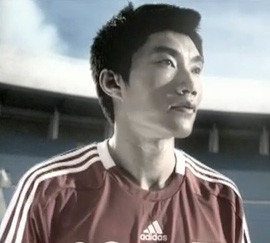 Football boot brands Nike and Adidas have been in court battling over the contract of Zheng Zhi, the captain of China’s national football team and Charlton Athletic player.

Zheng Zhi signed for Charlton from Shenzhen Ping’an on loan initially in December 2006 before making a brief return for Shenzhen Ping’an and then signing a permanent deal with Charlton in August 2007. In his home country, Zheng Zhi is considered the best Chinese player of his generation, making him a key target for Nike and Adidas to market their products in the country.

The argument between Nike and Adidas revolves around Zheng’s initial contract with Nike, which Nike feel was violated by the player and an approach from Adidas during the time when Zheng was contracted to Nike was immoral.

Adidas contacted Zheng immorally though it knew clearly Zheng was sponsored by Nike. Adidas benefited the most from Zheng’s breach of contract. While Zheng, lured by the good pay Adidas offered, has also harmed Nike’s interest.

The Nike deal which expired at the end of last year, meant that Zheng would where Nike products whenever possible in public and that he would refrain from wearing other branded products.

Adidas approached Zheng in 2004 to become an ambassador for them, Zheng then asked Nike for an improved deal but it was allegedly refused. In court Nike used evidence to suggest Zheng wore Adidas products in 2005, which violated their agreement. Subsequently, Zheng asked to terminate his agreement with Nike and began promoting Adidas products.

Adidas responded to Nike’s concerns by stating that Zheng was not paid by Nike on time and that this broke their agreement. They also went on to state that the reason Zheng wore the Adidas products was, because he was at the time, on international duty and the national side is sponsored by Adidas.

The court have not yet reached a verdict on the matter.

Written By
Felipe
More from Felipe
Barcelona face Chelsea this evening, many pundits are saying this is a...
Read More