Xabi Alonso is ready to put his body on the line for his country once again as he prepares for a re-match with Holland at this year’s FIFA World Cup.

Ahead of the fixture at Arena Fonte Nova on Friday, adidas has re-created the famous kick to the chest Alonso suffered at the hands of Nigel De Jong in the 2010 FIFA World Cup final. 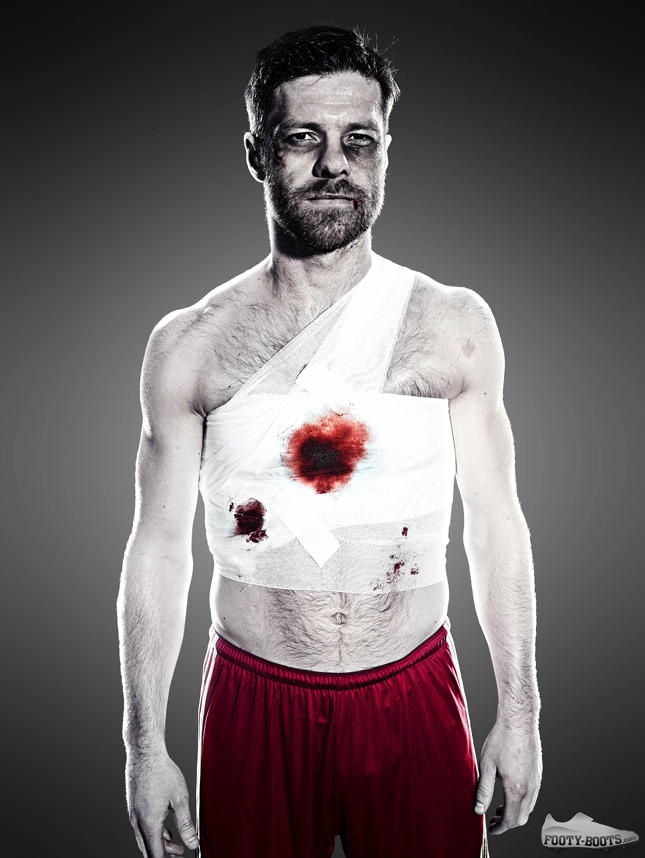 The picture, taken to demonstrate the lengths players are prepared to go to in order to succeed in Brazil, is part of the adidas allin or nothing FIFA World Cup campaign.

The allin or nothing campaign from adidas is all about challenging the world’s best footballers to seize their opportunity at the World Cup.

It is a provocative and bold campaign that underlines the hunger and determination of players willing to put their bodies on the line for their countries.

Following on from the launch of the full length ‘Wake Up Call’ ad and a series of images of players posing with bloody cows hearts (PETA loved that one.), this latest image starring the hirsute Spanish midfielder is sure to be the first of many

Commenting on the image, Alonso said, “It may have hurt to have been kicked in the chest, but the pain meant nothing when I was celebrating winning the trophy for Spain. The World Cup is not a time to think about such things. The pain is temporary, the victory is forever.”

Written By
Kyle Elliot
More from Kyle Elliot
Aviva are once again handing over sponsorship of Norwich City to leading...
Read More