If I ever won a World Cup Golden Boot, the only way you’d get me to part with it is prying it from my cold, dead hands. 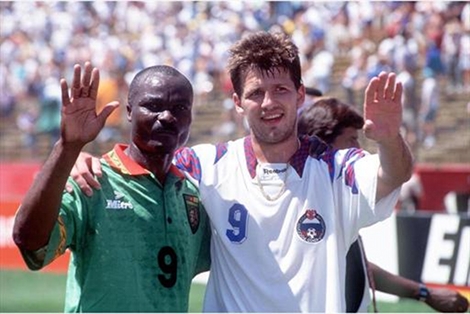 However, Russian striker and 1994 World Cup joint top scorer Oleg Salenko is parting with his award, due to a rather enforced choice.

Mr. Salenko explained that “I had a small business but after the (global) crisis everything is down and I need to pay off some debts,” added the former Russia striker, who played for Zenit, Dynamo Kiev, Valencia and Rangers before retiring in 2001.

He’s not, however, just going to stick it on eBay and hope for the best. After all, you have to worry that not many people would bid on an item that can only be described as “16 year old football boots for sale. Quite heavy. Half a Mil ONO.”

“I received a good offer from the United Arab Emirates,” Salenko said in Blik newspaper, “I’m not totally broke or anything like that so I have to sell everything, but the offer was hard to resist. I was told wealthy Arab sheikhs would take good care of the award by putting it in a local museum.”

Salenko won the award after slamming in 5 of Russia’s 6 goals in against Cameroon in the 1994 tournament, matching Bulgarian Hristo Stoichkov.

Written By
Kyle Elliot
More from Kyle Elliot
We've got every angle covered with our exclusive beauty shots of the...
Read More