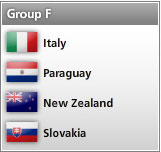 New Zealand had a relatively easy ride in qualification – with Australia moving out of the Oceania Qualification Group, The All Whites were relieved of their main contenders. Only having to beat Vanuatu, New Caledonia and Fiji New Zealand moved into the Play-Offs to face Bahrain for a place in the big tournament.

Blackburn Rovers man Ryan Nelsen captains the fledgling New Zealand side. A solid centre half, Nelsen looks to lead by example with a sharp eye for a pass as well as an aerial presence that causes attackers problems. Nelsen is also prone to chipping in with the occasional goal, having scored 6 in his international career.

Shane Smeltz is a striker high on confidence. Having gone from the likes of AFC Wimbledon and Halifax town in England’s non-league divisions to Gold Coast United in Australia’s A-league Smeltz’s last season saw him smash his own record for most goals in a season by netting 19 for his side. Smeltz’s international record is equally impressive; scoring 16 goals in 30 caps.

Ricky Herbert is a busy man, as well as managing the National team Herbert also heads New Zealand’s only Professional club; Wellington Phoenix. With this man at the helm expect New Zealand to be well organised and play solid positional football to help compensate for their lack of flair.

Prediction: Won’t get out of the Group

Written By
Kyle Elliot
More from Kyle Elliot
We don't like waiting - least of all for new football boots!...
Read More