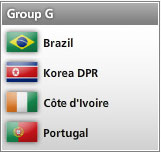 The Ivory Coast qualified for the 2010 FIFA World Cup back in 2009, when a 1-1 draw with Malawi was enough to see the Elephants through qualification automatically.

Captain Drogba is one of the players that all Africa is looking forward to playing. Strong, powerful and as he has proved in the Premiership – capable of unbelievable goals.

English fans will remember Didier Zakora for his time at Tottenham Hotspur. As the most capped Ivorian player in their history, The Elephants will be looking to draw upon the current Sevilla man’s considerable experience to try and help them fight their way out the ‘group of death’.

Tactical mastermind Sven Goran Erikkson has an exceptional reputation on the sideline. Managing Gothamberg to the UEFA Cup crown, and having taken the helm at some of the biggest clubs in Italy, including winning the Scudetto with Lazio. Since then he was most widely remembered for a somewhat successful stint in the England hotseat.

Written By
Kyle Elliot
More from Kyle Elliot
Always a favourite of the professional players, we see what the new...
Read More