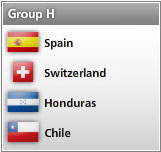 Chile qualified for the 2010 World Cup with a 4-2 away win against Colombia.  At the end of the qualification they eventually finished in second place, ahead of Paraguay on goal difference following the latter’s defeat to Colombia

Goalkeeper Claudio Bravo is Chile’s most experienced player in the 23 man squad. the experienced stopper also brings some knowledge on their Spanish opposition, plying his trade at Real Sociadad,

Humberto Suazo is Chile best option going forward. The striker has pace to burn and is capable of some deadly finishing. Also playing his football in Spain at the moment, at Zaragoza, he’ll be looking to upset some of the Spanish players he faces week-in,week-out.

Marcelo Bielsa has brought an exciting new era into Chilean football, fast-tracking young talent into the international ranks and demanding attractive, attacking football away from home.

Written By
Kyle Elliot
More from Kyle Elliot
One of the most exciting players on the planet at one of...
Read More