As we swiftly roll towards the end of the year, it’s a great time to look back on some of the best achievements in the footballing domain over the last 12 months – and where better than the summer’s World Cup in South Africa? 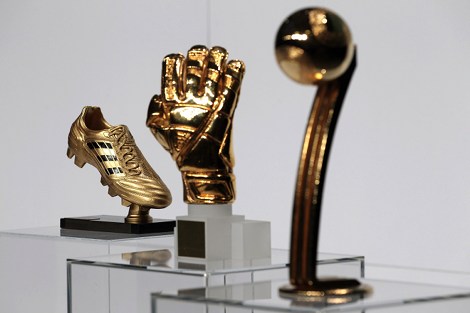 adidas held a ceremony last night to honour three players of the tournament, with Golden Boot for top scorer of FIFA World Cup went to Thomas Muller of Germany, the Golden Ball to Diego Forlan of Uruguay and the Golden Glove to FIFA World Cup to Iker Casillas of Spain.

We like to see adidas’ trophies for the tournaments that they’re involved in, as they always make the effort to make them resemble their latest bits of kit!

The Golden boot is a Predator_X, the Golden Ball a Jabulani and the Golden Glove a pair of Fingersaves – with great attention to detail paid to all of the trophies. 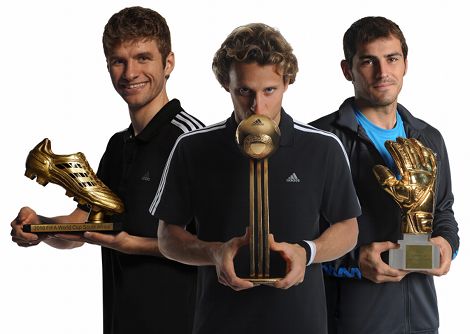 Uruguay’s Diego Forlan collects adidas Golden Ball trophy for the best player of the FIFA World Cup. Forlan netted five goals at the event and established himself as the most dangerous player on the pitch in each game he played.

FIFA World Cup winner Iker Casilas collected the adidas Golden Glove award for the best goalkeeping performance in South Africa. The Real Madrid star conceded only two goals throughout the tournament the first in Spain’s 1-0 defeat to Switzerland the other against Chile.

Thomas Muller of Germany collected the adidas Golden Boot for the top scorer of the FIFA World Cup. Muller netted five goals the same number as Diego Forlan of Uruguay, David Villa of Spain and Wesley Sneijder of the Netherlands but thanks to three assists , Muller claimed the trophy.

Worthy winners? Let us know in the comments!

Written By
Kyle Elliot
More from Kyle Elliot
The Big Cat up the ante with the stunning Puma King SL...
Read More