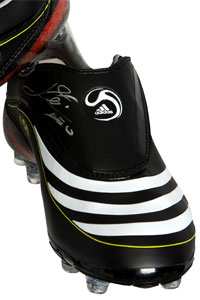 If you had to name the greatest thing about Argentina, what would it be?'

However, in current football terms, if you were asked the same question, chances are many of you would plump for Lionel Messi.

We would too, which is handy seeing as we are giving you a chance to win a pair of signed Lionel Messi football boots.

We’ve got a pair of the Argentine international’s Adidas F50’s, signed by the young superstar and ready to go to a new home.

To enter this great competition all you have to do is purchase any item from the Footy Boots Shop and your name will automatically go in the hat.

There’s no minimum price rule, and the competition is open up until 10th December 2008.

And, if you feel the need to go back and make further purchases, your name will be entered in to the competition as many times as you flash the cash. 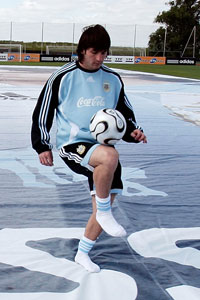 Health: At 11 was diagnosed with a growth hormone deficiency

Spain: Left Argentina for a new life in Barcelona after the club guaranteed to pay his medical bills

International debut: Sent off after just 40 seconds after coming on as a second half sub versus Hungary on 17th August 2005

Olympics: Was a gold medal winner in Beijing after Argentina beat Nigeria in the final 1 – 0. In front of a 90,000 crowd at the Birds Nest stadium, Messi set up the winner for Angel Di Maria

Written By
Felipe
More from Felipe
In the world of football boots, information is key. To keep one...
Read More