On Tuesday 29th of March England take on the Black Stars of Ghana in a friendly at Wembley – and you could be watching from the stands!

This competition is now closed. 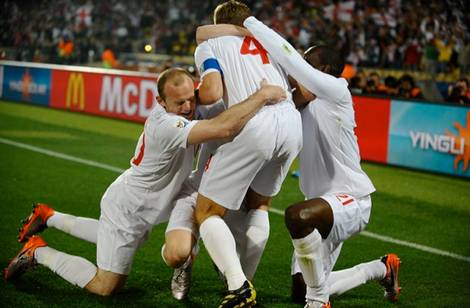 Footy-Boots.com have teamed up with The FA to give away one pair of tickets to what promises to be a highly entertaining friendly.

Both teams had aggrieved World Cup exits as England’s famous ‘Goal that Never Was’ and Luis Suarez’s infamous handball saw both teams take their leave from South Africa early, so expect both the Three Lions and the Black Stars to play with a point to prove at Wembley!

To be in with a chance of winning the chance to see this top match, you need to answer one simple question.

Who is the most capped player in Ghana’s team?

Send your answer along with your name and contact telephone number to [email protected] and cross your fingers!

The competition will close on Midnight Sunday (GMT) with the winner will be contacted by phone or email by a member on the Footy-Boots team first thing on Monday morning!

Once again, we’d like to point out that neither Footy-Boots.com or the FA are able to provide transport or accommodation as part of the prize, so make sure you can make it under your own steam before you enter!

To make sure you don˘€žËt miss out on tickets for England˘ next home game – a vital Euro 2012 Qualifier against Switzerland on Saturday June 4 Ĺ› go to www.TheFA.com/tickets. But hurry – the last two home games have been sell-outs!

Written By
Kyle Elliot
More from Kyle Elliot
The Nike+ Fuelband gets a special edition to celebrate this Summer's already-golden...
Read More