Carling have teamed up with talkSPORT, the nation˘ favourite sports radio station, offering Arsenal and Birmingham fans the chance to be at this year˘ Carling Cup Final. 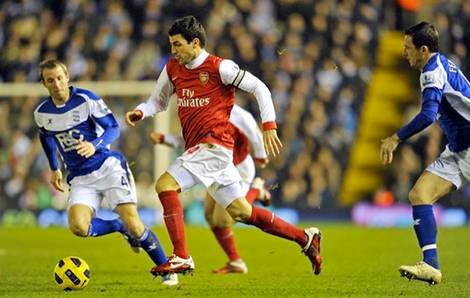 In the build up to the Carling Cup Final, talkSPORT will be getting rival Arsenal and Birmingham City fans to go head to head on the Alan Brazil Sports Breakfast show in a brand new competition, The Fans Final, for the remainder of the week.

And every day, the listener who proves they have the superior sporting knowledge will win a pair of tickets to the Carling Cup Final, with the runner up netting a case of Carling.

And that˘ not all. Simply by registering to take part in the competition you could get involved in Carling’s great Home Delivery service that has been running throughout this season˘ competition.

To help improve the experience of fans and their mates watching games at home extra special, Carling has been sending beer, glassware and club legends straight into fans˘€žË living rooms.

If the players of your chosen team score more points than the opposition’s throughout the week, then you could be in with the chance of winning 1 of 100 Carling Cup final packs – which include a case of beer and a match-day programme – being offered to the highest scoring fans.˘€žË

Written By
Kyle Elliot
More from Kyle Elliot
After last week's teasing, we can finally see what adidas had in...
Read More