How would you like to play football with a Premier League striker and England international? Well, Footy-Boots.com have teamed up with MARS’ ‘Just Play’ scheme to give you the chance to do just that! 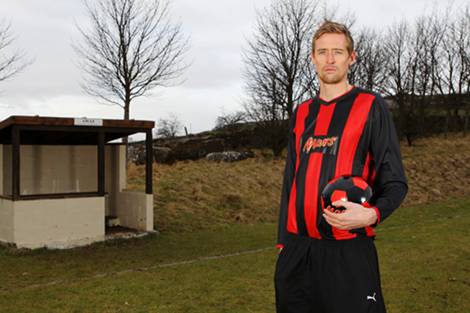 MARS and the FA have been working on the ‘Just Play’ scheme for the past month or so, hoping to break down the most common barriers to football (can’t find a pitch, no ref, too expensive, can’t get a team together), allowing more people to play the Beautiful Game.

The ultimate goal of the partnership is to get 150,000 new participants playing the game for at least 30 minutes a week by September 2013, and deliver a total of 3.9m hours of extra football played each year throughout England.

But starting with just a handful of players, MARS are focusing on how England International Peter Crouch got into the game of football.

In particular, MARS are taking Crouchy back to his footballing roots. The 6’7″ striker grew up playing football in Ealing, in London – first kicking about in the park behind his house in the park and as he developed, moving onto more organised football at his local team Brentham FC – where he played with his dad and friends.

Now, we’re after 5 lucky Footy-Boots.com fans to share in Peter’s once-in-a-lifetime trip down memory lane by joining him in a game of football at one of his most beloved locations!

We know from our recent ‘Shoot your Boots’ competition that we have one of the most kick-ass communities on the internet, so we’re hoping for plenty of entries on this one!

All you have to do, is leave us a comment below with your name, Age, and Location on – and you could well be sharing a pitch with the former Villa, QPR, Portsmouth, Liverpool and-currently Tottenham Hotspur striker!

Some ground rules – Entrants must:

– Be 16 or over
– Be able to get to London (Neither Footy-Boots.com or MARS will be able to cover travel expenses, we’re afraid!)
– Be available on Monday the 23rd of May 2011
– Provide their own football boots – though Full kit will be provided!

We’ll pick 5 at random to represent the Footy-Boots.com faithful in a kickabout with Crouchy himself on Saturday, and contact the winners the same day.

So, what’re you waiting for? Get commenting!