Interestingly, as Nike has announced that it’s promoting black football boots for the start of the 2009 / 2010 season, adidas have gone the other way by releasing the F50i in White / Black / Red. 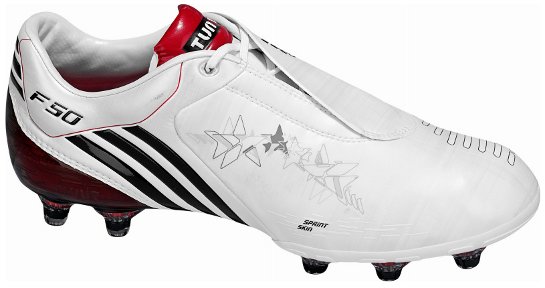 The adidas football boot, which enjoyed a hugely successful launch just prior to the Champions league final, is made from a revolutionary single layer material called “SprintSkin” which gives the wearer incredible touch and reduced weight. The football boot is also thermo-bonded making it thinner, lighter, and faster. Improved grip has been achieved through the introduction of ‘a sticky print’ across the kicking sweetspot.

The F50i continues the customisable heritage of the F50 series giving players the choice of leather, synthetic, laceless and climacool uppers combined with a choice of hard ground, soft ground, or firm ground studs.

Special attention has been paid to the fit and comfort of the boot. The lace cover reduces the layers between the foot and the ball and creates a clean kicking surface.

Another customisable feature is the interior of the football boot. Players can choose from one of two different chassis to which the studs are subsequently attached. The comfort chassis offers perfect stability and stud pressure distribution, while the ultra-light lightweight chassis additionally offers maximum flexibility in the forefoot area and significantly reduced weight.

In addition to its modularity, the F50i, like its predecessor, features a semi-transparent heel element, which combines with the boot’s appearance to produce an exceptional design. The transparent TPU provides a further reduction in the weight of the boot and an improvement in stability and flexibility thanks to its different degrees of hardness.

The material in the heel section, where a high level of stability is required, is particularly strong and sturdy. The closer it gets to the forefoot, the softer and more flexible the material becomes. The result is a highly modern, lightweight and flexible football boot for every player.