In August 2002, Capital Radio ran a feature on an up and coming player at Everton. Reporter Gary Weaver was stood in the playground of the De Le Salle school in Croxteth on Merseyside raving about an ex pupil and striker by the name of Wayne Rooney.

He was, according to Weaver and a number of past and present Everton players, the most exciting youngster any of them had ever seen. 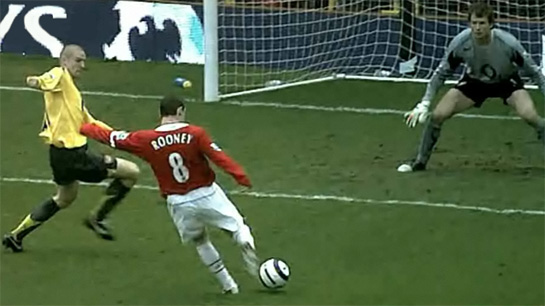 Less than 2 months later, Rooney went from child prodigy to national superstar when he smashed in ‘that’ goal for Everton against Arsenal at Goodison Park, ending the Londoners 30 match unbeaten run in to the bargain. The goal prompted commentator Clive Tyldesley to say “Remember the name: Wayne Rooney.” Rooney was 5 days short of his 17th birthday.

Spin forward half a decade and Rooney has moved on from national superstar to global brand.

He’s one of the biggest names on Nike’s books (he wears the Total 90 Laser II), received a £5 million advance from publisher Harper Collins for a 5 book deal and he has marketing agreements with Coca Cola, Nokia, Ford and Asda.

And of course, there’s the small matter of his forthcoming nuptials with long term girlfriend Coleen McLoughlin, herself a media favourite in her own right.

In this Nike video, Rooney talks about the sacrifices he’s made for his sport, the level of practice required and how his attitude to training and progressing as a player shaped his career and stellar success.

If you missed out on Joe Cole, you can catch up with the England and Chelsea midfielder here WHAT JOE KNOWS.

Written By
Felipe
More from Felipe
Chelsea's inspirational midfielder confirms he will be lining up from the start...
Read More