Winston Churchill (and when was the last time you saw him quoted on a football web site) once described the country of India as a riddle wrapped in a mystery inside an enigma.

If the former British Prime Minister was still with us today he might well use the same analogy when describing the talent that is Joe Cole. 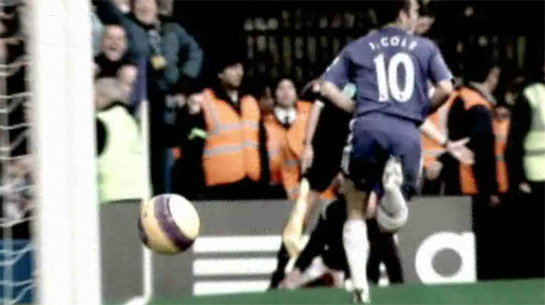 The personification of footballing artistry, flair and invention or a modern day, cosmetic non requirement?

Up until the 2006 World Cup, Cole divided opinion amongst England football fans like no other player since Glenn Hoddle.

But such were his performances on England’s ‘problem’ left side, that nearly all the doubters were silenced. Indeed, his amazing volley against Sweden in the group stages and assist for Steven Gerrard’s goal saw him named as Man of the Match, a feat he repeated in the 2 – 1 win against Switzerland earlier this year – Fabio Capello’s first game in charge of the national team.

Cole shot to prominence in his early teens after a remarkable performance for the England youth team when he scored 7 of the 8 goals they put past Spain. A product of the West Ham youth academy, his exploits since both at club and international level have all been well documented.

However, if you thought you knew all about Joe Cole, then think again.

Footy Boots gets right under the skin of the 26 year old as he talks about growing up, his early teams and his desire to succeed. And there’s invaluable advice to young players who are hoping to follow in Cole’s imperious foot steps.

Written By
Felipe
More from Felipe
Andy Hunt was a Professional footballer for 10 years in England, we...
Read More