Football boot brand Umbro could soon increase its presence in the US soccer market with the news that Premiership outfit West Ham United is looking to launch a team stateside by 2009.

Umbro, who has recently been the subject of takeover speculation, linking it to a buyout by Nike (see article), is dwarfed by Adidas in US soccer, with the German brand owning the exclusive rights for the supply of Major League Soccer clothing until 2017. The England team’s football shirt supplier however own 98 percent of the United Soccer League, the equivalent of the English Football League. 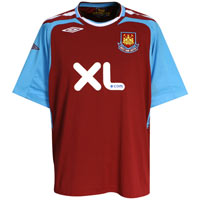 The ground-breaking move would see the Hammers play in United Soccer League One, America’s equivalent of the Championship. Arsenal currently have a partnership with MLS outfit Colorado Rapids, however this would be the first time a British club have agreed to compete in a foreign league in their own right.

And Francisco Marcos, president of the USL, claims West Ham will not be contravening rules. He said: ‘FIFA rules only state that owners cannot have two clubs or teams competing in the same competition, so there’s no problem here.’

West Ham signed a deal with the USL at the end of July, a reciprocal arrangement involving academy players and branding. ‘At that point the option to play in the USL was inserted in the agreement. We’re looking to West Ham for setting a trend in terms of direct ownership,’ added Marcos. This would be very different in terms of responsibilities and commitment, like the difference between renting a flat and owning a house. But Umbro, West Ham’s kit sponsors, also own 98 per cent of the USL and I own the other two per cent, so they will have all the help they need to get set up here.’

Martin Prothero, Senior Vice President of Football for Umbro and Chairman of USL commented: “I am delighted to see this partnership between two of Umbro’s strongest brands. West Ham United’s unique record in developing young players, combined with the USL network of clubs in the United States, Canada and Caribbean can provide very exciting programs and outcomes for both organizations. Umbro has a considerable investment in the USL property and we believe that this partnership will be the first of many successful international ventures between USL and prominent foreign clubs. Umbro is very pleased to be partners with both organizations and looks forward to being an active partner in the West Ham United’s initiatives in the United States.”

A successful US based West Ham United team will surely open the floodgates to interest by further Premiership teams looking to gain a foothold or increase their presence in the US soccer market.

Written By
Felipe
More from Felipe
Spurs decide to reveal all three new kits for next season in...
Read More