As part of The Football Association’s Olympic legacy, Wembley Stadium has announced that it will donate 50 footballs to British youth charities for every goal scored by Team GB during the Group Stages of the Olympic Games. 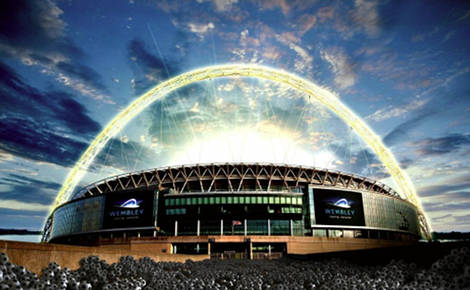 A venue at the 1948 Olympics, Wembley again plays host to Olympic football with nine matches scheduled to take place, including the men’s and women’s gold medal matches. To celebrate, Wembley Stadium will donate footballs to a selection of charities and youth groups for every goal scored by both the Team GB men’s and women’s teams during the Group Stages.

“As the Games draw nearer, you can feel the Olympic effect taking over the country and to have Olympic football back at Wembley Stadium after 64 years is incredible,” said Roger Maslin, Managing Director of Wembley Stadium.

“Every person in this country has contributed to the Olympics in one way or another and we want to do our bit in giving back to the community. It’s an honour to be a part of London 2012 and we look forward to welcoming the Olympic Football fans, the Olympic family, Olympic athletes, journalists and visiting dignitaries. Wembley is committed to deliver the best Olympic venue experience for everyone.”

Olympic football at Wembley provides a great opportunity for all the family to experience the Olympic Games and see the world’s best players in the women’s tournament and stars of both today and tomorrow in the men’s tournament. The first men’s Team GB match at Wembley Stadium takes place on 29th July with Great Britain taking on United Arab Emirates.

Two days later on 31st July, the Team GB women play their first match at Wembley against Brazil. This is the first time in Wembley’s history that a women’s match will take place at the iconic home of English Football.

The highest ever attendance at a women’s Olympic football match is 76,489 which was recorded at the 1996 Olympics in Georgia at the Stanford Stadium, a record that could be broken this year at Wembley.