As a kid, did you ever dream of going on an adventure with Dennis the Menace? Well, this Easter you can make your childhood dream come true (and even treat your own kids!) by attending a unique themed Wembley Stadium Tour, in partnership with the UK’s best loved comic, The Beano. 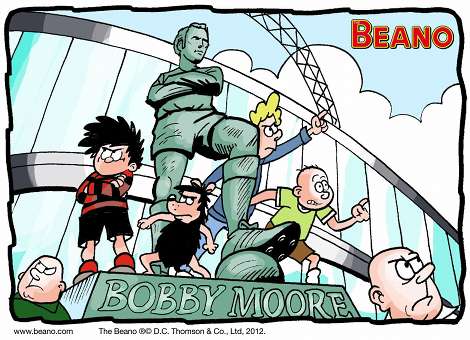 To celebrate the release of a special one-off Wembley edition of The Beano, Wembley is opening its doors and inviting families to join Dennis on an amazing adventure around the home of English football. On the tour, which begins on 1st April, kids will not only get to meet Dennis himself but also receive a complimentary edition of The Beano and a chance to take part in a special ‘spot Dennis’ sticker game.

The unique Wembley issue features Dennis, Gnasher and their mates, making their way to the Stadium to watch a football match. Their mischievous antics find them in trouble with security and having to sneak past an unsuspecting Prince William and Kate Middleton sitting in the Royal Box as well as posing incognito on the Bobby Moore statue.

The issue also includes Ball Boy purchasing a piece of turf from the 1966 World Cup  Final to give his own football team some good luck and Fred from Fred’s Bed travelling back in time to the historic match itself. This edition hits newsagent stands from 28th March.

Mike Stirling, Editor-in-chief, The Beano and Beanomax, said: “We’re delighted that two British Icons in The Beano and Wembley Stadium can come together in partnership. We know that our readers will enjoy seeing what Dennis, Gnasher and the Beano all-stars get up to in and around this famous stadium and that families will enjoy the special themed festivities around the Easter holidays when they take The Beano Tour.”

For more details, head to the Wembley Stadium Facebook page!

Written By
footyboots
More from footyboots
Barcelona ace Leo Messi will be rocking this incredible pair of adidas...
Read More