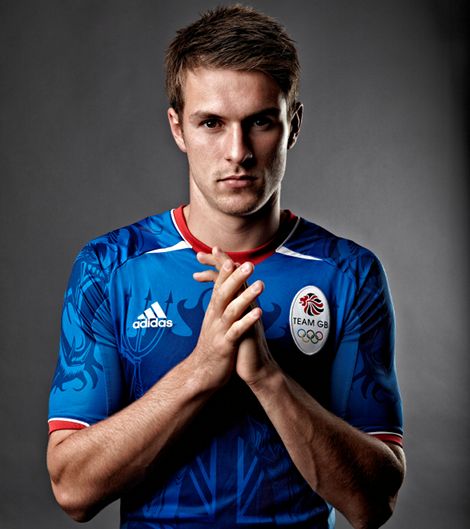 The two stars have become the very first players to show any sort of allegiance to the Team GB cause since the announcement of Stuart Pearce and Hope Powell as coaches for the ‘super-team’ last month.

Both Ramsay and Bale have appeared in promotional shots for the new' Team GB Supporters Shirt, but their national team coach – who managed the two stars in an unsuccessful Euro 2012 qualifying campaign – has blasted the move as ‘propaganda’ from adidas

Ĺ›It's unfortunate Gareth and Aaron have been used in the way they have to publicise it,ĹĄ said Speed.

Ĺ›The fact they are Welsh and wear a certain type of football boot has probably influenced that.

Ĺ›Fans have to understand they can't blame Gareth and Aaron for this. They are being used for propaganda.ĹĄ

Speed’s outburst follows in stark comparison to outspoken Welsh international Craig Bellamy, who spoke out in support of the brave move by the two young players;

Ĺ›If they do get the opportunity I for one will back that, it would be a great honour for them.ĹĄ

Whilst we can see Speed’s point that the move is likely influenced by adidas (well, they wouldn’t want someone wearing Nike boots in their ads, would they?) we’re inclined to wonder whether has Speed’s Welsh team not lost 5 of their qualifying games, would Ramsay and Bale be considering Olympic duty at all?

If you like the look of the new' Team GB Supporters Shirt, it’s on pre-order in the Footy-Boots.com store now, for release on the 10th of November 2011.

Written By
Kyle Elliot
More from Kyle Elliot
Nike and Cristiano Ronaldo will hark back to the last World Cup...
Read More