In part 3 of our Q & A with Wayne Rooney, Rooney talks about Manchester United’s chances of glory this season, the competition and his future. 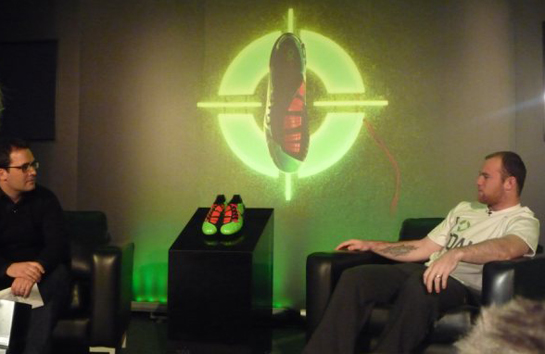 Manchester United as a team are still very much in the hunt for the Premier League title do you think you can get on and win it again and what would that mean to you?

I hope so! We won the last 3 and you know, no one’s ever won four so we’d be making history if we can win it. Again this year, it’s tighter and obviously more exciting for the fans, but we’re hoping we can finish top.

At the start of the season there was talk about ‘The Big 4’ and who was going to be up there with you. Is it the teams you expected that would be up there?

Yeah, ourselves, Chelsea, Arsenal; Liverpool have struggled a bit but I’m sure they’ll be up there at the end of season and now obviously [Manchester ]City and stuff are doing well and Villa and Tottenham. In general it may be not the teams you’d think.

When you exploded onto the scene people talked about your mental attitude, strength. Now you’re 24 and more experienced you still seem to have that drive and energy in every game, Where does that come from for you? [laughs] You know I just hate losing. Some times you’re tired, but you don’t want to loose. That gives you extra determination to get the next ball or work hard, I think it goes up. And my mum and dad taught me to never give up and be as strong as I can, so that’s what I always try to do.

There is always going to be speculation that a big player such as yourself is going to leave, what do you think about all that stuff in the media?

Yes, obviously when big teams are interested there’s always speculation. It’s nice to be talked about, but as I’ve said many times, I’m at United and I’m happy.