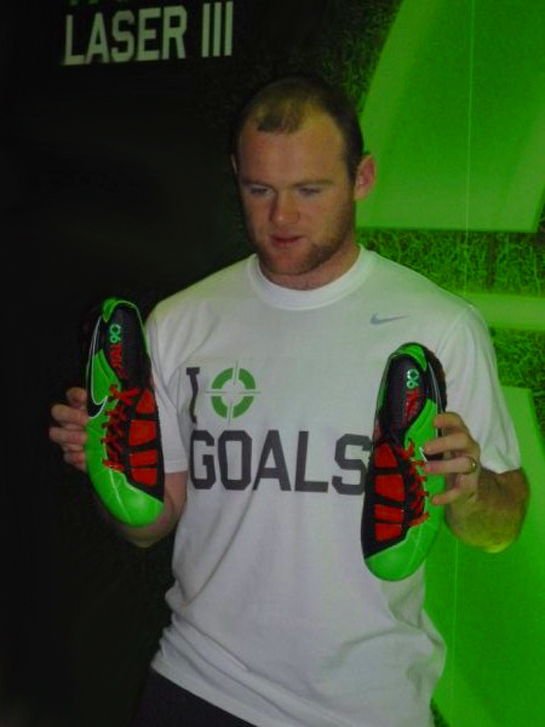 He’s just scored four goals in a Premier League game that put his club top of the league and him top of the goalscoring charts.Not only are Manchester United reliant on him in the run in to the end of the season, but England’s chances of success in the World Cup this summer will be influenced by his form and fitness.We caught Wayne Rooney at the top of his game, here’s what he had to say…..

So Wayne, you’ve been wearing the Total 90 boots for a few weeks now, designed for total accuracy and for players like yourself, how have you found them?

They’ve been great and I think it’s very important you get your footwear right. For me personally, they’re as good as they can be because they’re so comfortable and they protect my feet, and yes, I think they really help me hit the ball well.

They showed me different types of boots and different designs and asked what I thought on the ideas they were planning. Obviously I gave my feedback on what I thought was the best and they’ve put it into the boot you see here today, and I like how it’s come out, so it’s always nice to be involved.

The boots are the major tools of your trade. Do you think it’s good that you really get a say in what Nike are creating for you?

Yes, I think it’s brilliant. Growing up, you always wore boots that you saw your favourite players wearing, and to actually have input in that process…it was a privilege for me to do that.

One of the things that comes with the boot is the digital package of training drills and signature moves by key players. Are there any players you remember copying when you were a kid?

Yeah, I’ve always said Michael Owen after his goal against Argentina, that was an amazing goal and obviously we’re playing together now, so that’s good as well.

There’s obviously a huge amount of natural talent in what you do, but a lot of training as well. What sort of shooting drills and accuracy drills do you do, and do you do it on your own or with the team?

I’ll do it with the team, and obviously at the end of the session I’ll go away and do some on my own, you know – technical work on finishing and scoring goals. You know, they’re all different; there’s power, curling and just different types of finish which I’ll use in a game.

Written By
Felipe
More from Felipe
Copa América – The Oldest National Teams Tournament in the World Even...
Read More