When announcing the signing of then-Liverpool forward Craid Bellamy during the Summer, Warrior confidently said we’d be seeing their football boots on training pitches at the start of the new season – and here they are! 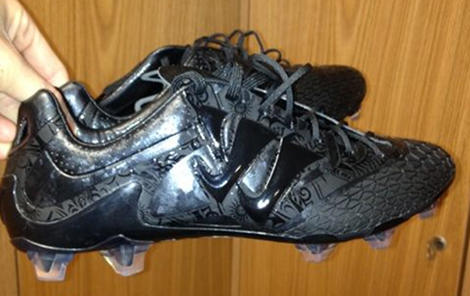 Celtic striker Gary Hooper took to Twitter this morning to reveal a picture of the black-out prototypes after training on Tuesday morning, simply stating that he’d been ‘testing’ them.

Whilst the forward was scant on details, the boots themselves tell all about the debut boot release from Warrior.

The Warrior logo is prominent on the midfoot, which seems to be made of synthetic. Whilst they don’t look like a ‘speed’ boot, the presence of a mostly-synthetic upper indicates that Warrior are placing some emphasis on keeping the weight of the boot down – something that could prove to be vital for a ‘new’ boot.

Most interestingly, the toe seems to be covered in a high-friction rubber that instantly makes us think of a car tyre. We can imagine that this zone would be a great ball-control area for dribbling, and if it extends onto the instep it could be an excellent shooting & passing component. 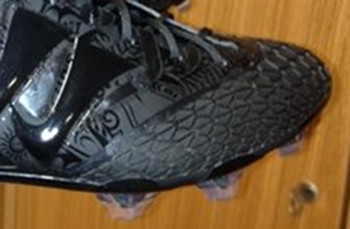 As well as a side-offset lacing system, the heel counter looks to be inspired by the old Puma v-Konstrukt or Mizuno Wave system, given it’s low-profile and integration into the soleplate.

Speaking of the soleplate, Warrior seem to be playing it safe with a bladed design and dual-density, transparent studs reminiscent of the first Nike CTR360 – though we wouldn’t doubt Warrior bringing in some of their expertise from their Lacrosse shoes and surprising us with something innovative elsewhere on the sole.

The final talking point is the watermarked tribal patterns across the lateral side of the cleat. Having provoked a big reaction with the sleeves on the Liverpool Third kit, it’s definitely a bold choice by Warrior to bring something similar to their boots – hopefully it stays as a watermark; we wouldn’t want to see it in contrasting colours!

Do you think Warrior could have a surprising hit on their hands in this new boot?