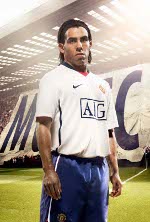 United, through their manager Sir Alex Ferguson, say that the Argentine has been offered a deal to stay at the club after his loan expires this summer. But Kia Joorabchian, who owns Tevez’s registration, although confirming that a meeting with chief executive David Gill had taken place, denied that any offer had been forthcoming saying:

It is categorically untrue Manchester United made an offer to try to persuade Carlos to stay.

Tevez helped United move to within one point of retaining their Premier League title on Wednesday night when he scored in their 2 – 1 win at Wigan.

And Ferguson has suggested that the club want the 25 year to remain stating:

He knows I want him to stay. We spoke today and chief executive David Gill has had meetings with him.

We have given him an offer and we hope he accepts. The problem is we are not negotiating with a football club.