There’s nothing like an awards ceremony. Red carpet, cameras flashing, high fashion, celebs, goody bag and all that.

That’s why at Footy Boots, we are asking for your help so we can hopefully experience all of the above plus a few too many glasses of bubbly and a drunken cab journey home interspersed with some of our favourite football chants.

Footy Boots has been nominated as Best Sports Blog in the 2008 blogger’s choice awards, the most popular user-generated blog voting site on the planet! 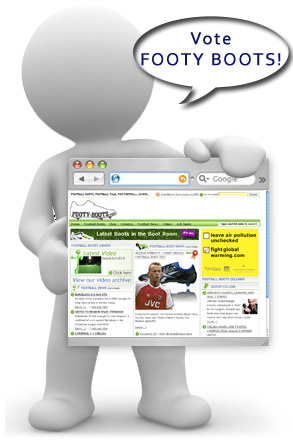 If you think Footy Boots is deserving of such an honour, and why wouldn’t you, then you can vote on line at this address. All you need to do is follow the link, register and then cast your vote. It’ll only take a minute or so.

If nothing else, it would be great to get a football site to the top of the voting leaderboard. Last year’s winner was a horse racing blog, and we can’t have that again can we?

Go on – this is your chance to generate some excitement in the Footy Boots office, and the last time that happened was when the boss bought in a video of some new Adidas football boots only to find that someone had recorded a film over it best described as adult entertainment!

Thanks from the Footy Boots team.

Written By
Felipe
More from Felipe
Blackburn goalkeeper Paul Robinson could be one of a few players to...
Read More