When we saw that the latest batch of FIFA 11 screens had hit the net, we were pretty excited, but we were even more excited when we saw that an unreleased boot had slipped into the images!

We’ve heard rumours of a new Voltage Cherry Superfly II, and this could well be our first look at the new colourway, albeit digitally.

Seen here on the feet of a digital Marko Marin, you can see a touch of orange on the bottom of the boot, meaning that the signature NikeSENSE studs will remain that colour on Nike’s signature speed football boots for the time being.

There also seems to be a silver or light purple design on the instep, which fits in with the Superfly II philosophy of having two contrasting flash colours in the design, as well as dark blue, possibly obsidian Nike tick across the toes. 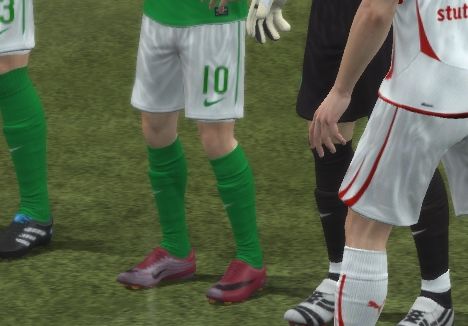 Whilst not as bold pink as the notorious Vapor 4 Berry, we think these boots are definitely their spiritual successor in such a bold colourway!

We’re looking forward to seeing if any other unreleased football boots are snuck into FIFA 11 when it lands in just over 2 weeks time, like these Voltage Cherry Superfly II‘s – but until then we’ll have to make do with the demo which was released yesterday!

Written By
Kyle Elliot
More from Kyle Elliot
It's almost time to unleash the new Predator and adidas are giving...
Read More