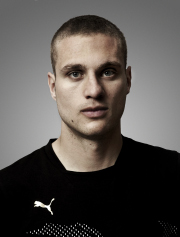 After missing the Champions League semi final, 1st leg against Barcelona because of a stomach virus, Manchester United defender Nemanja Vidic is now doubtful for the Premier League title race clash with Chelsea on Saturday.

Vidic went down with the stomach bug in Spain which forced him to miss the 0 – 0 draw at the Nou camp with Wes Brown being switched to cover central defence and Owen Hargreaves at playing in Brown’s position at right back.

“He had very severe stomach pains, so we sent him off to hospital.”

United are three points clear of Chelsea with three games remaining, but would effectively clinch the title if they win at Stamford Bridge, given their superior goal difference.

Ferguson said Vidic had remained under observation until late in the night on Tuesday and although his conditioned improved on the day of the game, he wasn’t considered for selection.

Written By
Felipe
More from Felipe
Much has been said of the Adidas Europass, the official match ball...
Read More