The Serbian rock that Manchester United’s last six years of titles have been built around, Vidic is the iconoclastic ‘hard’ man half of a modern centre back pairing.

As well as imposing man-marking, tough tackles and powerful clearances, Vidic’s role at the heart of the Old Trafford defence buys his team-mates time, isolates opposing players and even creates (and scores) the odd goal.

But with the winds of change blowing strong through the Stretford End, is Vidic’s faith in the club and his team-mates still as strong as ever? Puma pitched a few questions to their PowerCat 1 stalwart for us to find out.

Q: What positive developments have you noticed now that David Moyes is manager?

A: We're been working quite a lot on tactics with David Moyes and he's been working a lot with players individually to improve their abilities.

Training has been intense and hopefully all of these things we've been doing will help the players improve to be better and to play better through the season.

Q: Do you think Manchester United has a chance of winning the Premier League title again

this season and which teams do you think you'll need to watch out for?

A: Yes, we definitely believe we can win the title. I would say our main competitors this season are Chelsea and City.

Q: Last season you struggled with injuries; how is your condition so far this season?

A: I'm in good condition this season and I'm training well at the moment. I've already played a few games and I trained in the pre-season, I'm good right now.

Q: In your opinion, what makes an ideal team captain?

A: I think to be a good captain you first of all need to be a team player. Secondly, you have to lead by example to the young players by training hard and performing well. 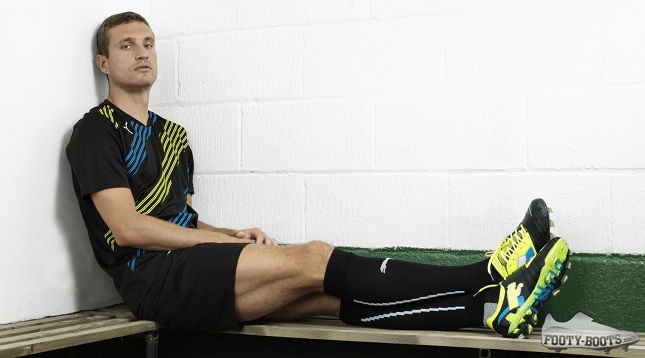 Q: Who are the most promising young stars on the Manchester United squad and why?

A: We have two players in the academy, Adnan and Jesse, who really stepped up in the pre-season.

They both played really well on the tour and I think these players could make the cut in the future if they continue developing and training hard.

Q: What are the most important features in a football boot for a defender?

A: The most important feature in a boot is that it is comfortable; if the boot fits well to the foot and is lightweight then it will be comfortable to play in.

Q: Do you remember your first pair of boots?

A: Yes, I definitely remember my first pair of boots. It's always a big moment when you get your first pair and start playing football, a great memory I will always have.

Q: Who was your favourite player as a child?

A: I didn't have a particular favourite player as a child, but my favourite team was Red Star Belgrade.

Nemanja Vidic wears the PUMA PowerCat 1 FG boots and was speaking at the launch of PUMA Football Club, an online community allowing fans worldwide to get closer than ever before to their favourite stars. Head to www.PUMAFootballClub.com to conquer challenges and win trophies #PUMAFC