adidas are gearing up for a weekend of ‘Smart Football’ as the new adidas F50 adiZero miCoach goes on general release to professionals over the international break.

Whilst we’ve spotted the likes of Benzema, Suarez and many more breaking in their new soccer cleats ahead of the weekend’s fixtures, adidas are making sure that Messi is the most watched F50 player, as their first TV ad for the new F50 adiZero miCoach hits our screens.

The ad starts as Messi travels to the stadium for a game in a limo, installing the miCoach chip into his red-and-yellow soccer cleats as he travels, before in a flurry of flashbulbs and chatter, we’re transported to the pitch as Messi runs rings around Nigeria in footage filmed in Bangladesh in September. 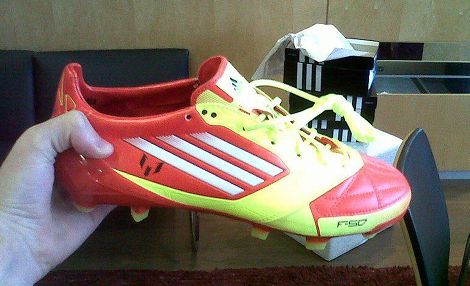 Messi took to his Facebook page yesterday to show off his new footwear ahead of wearing them on the pitch this weekend.

Whilst not normally cause for much fuss, the image of the new F50 adiZero miCoach the Barca ace posted up showcased the first time his new ‘M’ logo has featured on any pair of soccer cleats – making them something of a special pair.

Also from camp adidas ahead of the weekend’s games is this nifty new viral showing off all the features of the new F50 adiZero miCoach at adidas’ Sports performance centre.

Two Ajax players go head-to-head wearing the new ‘smart’ soccer cleats, with the miCoach recording and analysing all the data as they play.

Then, after uploading their data to their iPhones, the two Ajax stars show off some of the less talked-about features of the F50 adiZero miCoach, as they use their data to create avatars to use in a FIFA-style simulation – cool!

Are you looking forward to seeing adidas’ latest soccer cleats in action this weekend?

If so, let us know in the comments!