The new Chelsea Home Shirt for the 2011-12 Season has been released by adidas – be sure to check it out, right here on Footy-Boots.com!

To celebrate the launch of the

new Chelsea Home Shirt, the sports brand has teamed up with the famous pop artist Sir Peter Blake to create an iconic artwork to celebrate the club.

Chelsea fan Sir Peter Blake is responsible for some of the most iconic artwork of recent times – his most famous work being the sleeve of the Beatles’ album “Sgt Pepper’s Lonely Hearts Club Band” and the cover of Oasis’ great hits album “Stop the Clocks”.

The collage is the centre piece of an adidas marketing campaign called Made from 100% Chelsea and is based on the belief that a football club isn’t just about the team – it’s about the fans, the coaches, the staff and all the individuals who make up the fabric of a club like Chelsea FC. 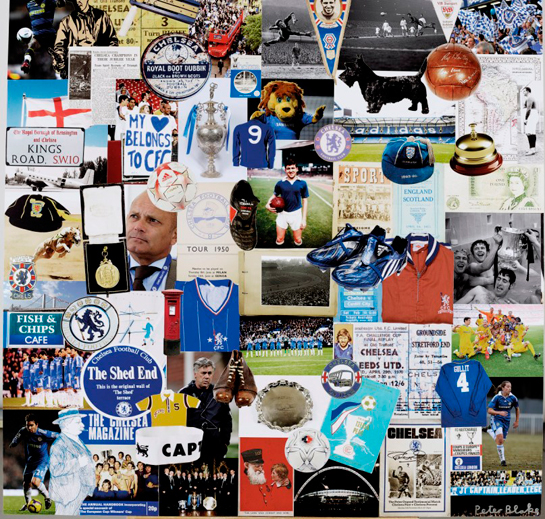 Blake visited the club over a six week period and conducted interviews with players, coaches, staff, and fans. He then used this knowledge and combined it with his personal memories to create an exclusive collage that represents what it means to be made from 100% Chelsea.

All the images used by Sir Peter have a story to tell, from the terrier that played a role in the creation of Stamford Bridge to the £1 note Ken Bates used to buy the club in 1982.'  Specific people who told him stories include:

* Goalkeeper Petr Cech talked about how the atmosphere in the Chelsea dressing room, saying is like nothing he has ever experienced before. This inspired Sir Peter to choose a picture of the FA Cup winning team of 1970 celebrating their win in the dressing room bath.
* The Chelsea museum curator talked about the impact of Peter Osgood on the club and how he was known as the King of Stamford Bridge. This inspired Sir Peter to include several images within the collage of Peter Osgood.
* The Deputy Head Groundsman talked passionately about the occasion when Chelsea won the Premier League title in 2005/2006. The staff came back to the Kings Road at midnight and there were still fans out on the street celebrating. This inspired Sir Peter to use the image of bus top shot celebrations.

Whilst making the one-off piece Blake was filmed for a “making of” video and was interviewed to give his thoughts on the process as he worked. The resulting films show the passion and love of the club displayed by the players, the fans, and Blake himself.

The finished piece of art will be fully explorable online on a specially designed Chelsea micro site. The micro site also includes the background on the design of the new kit, a history of the Chelsea badge, origins of the Chelsea team, videos of the creation of the collage and a collection of unique Chelsea firsts. The artwork also features on the outside of the Chelsea megastore and in adidas outlets from May 6th allowing all fans of the club the chance to experience it.

Written By
Felipe
More from Felipe
If you are thinking about going over to South Africa to watch...
Read More