Uruguay and Atletico Madrid striker is a man who has little trouble finding the target with some football boots on his feet (unless you ask Sir Alex…).

But apparently the South American marksman is a little less accurate with a set of golf-clubs in his hands!

Which is why, in this fun new viral for the new adidas adiPower Predator, the World Cup 2010 Golden Ball winner has ditched his putter for power to take on a course!

adidas have created the first football boots ad that we can think of in a little while that doesn’t take itself too seriously, featuring a light-hearted soundtrack and plenty of sunshine as Diego and his caddy take on 18 holes with his adidas adiPower Predators and an adidas SpeedCell football. 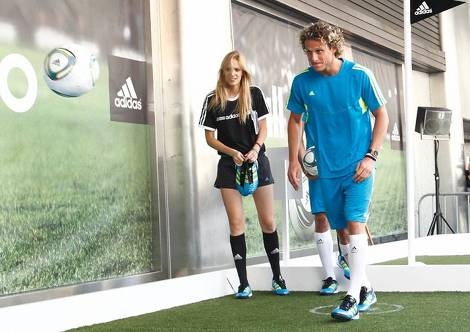 Released this week on adidas’ Spanish Facebook page, the viral was to promote the launch event of the new adidas adiPowers ahead of the new La Liga season.

In a similar vein to the English launch event back in June, the Spanish launch – held in Madrid – saw Forlan and Real Madrid’s Alvaro Arbeloa and Antonio Adan take on a series of challenges to prove their power and control in the new adidas adiPower Predator.

Regardless of the event having been and gone, we really like this nifty little ad from adidas, and it definitely captures the light-hearted side of football boots adverts of years gone by.

What did you think to the video? Or – even better – were you at the launch in Madrid?

Written By
Kyle Elliot
More from Kyle Elliot
Win a once-in-a-lifetime training session at the home of the national team...
Read More