What do you get when you have Lionel Messi, David Villa, Zinedine Zidane and a massive production value?

It has to be the new adidas Viral video for the adidas f50 adiZero!

The latest video is a continuation of the wildly popular ‘Every Team Needs…’ campaign from this team last year, which saw French legend Zidane scour the globe for the vital components for the Ultimate Team.

The scene is set as Zizou himself races through the visually-spectacular comic-book city. The reason? He’s late. For the ultimate contest of speed!

It’s Spain vs. Argentina, and Zidane wants to see ‘The Spark’ and ‘The Blaze’ go head to head. The spotlight of the video is firmly planted on the adidas f50 adiZero, as both players leap, sprint, twist and trick their way through the oppositions defence and slam in some goals. 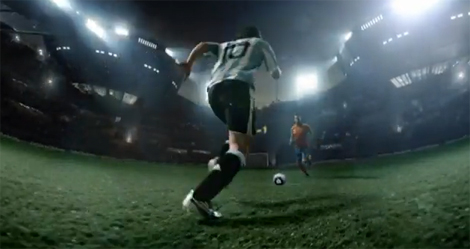 In a nice touch, both players are wearing the different colourways of the football boot – Messi is seen in the launch colourway of Chameleon Purple/White/Electricity and Villa is rockin’ the World Cup Colourway of Black/Sun Yellow.

What you have to admire is the presentation of the video – not only is the hyper-realistic setting one of the most impressive footballing vista’s since Zlatan showed us his transforming training pitch a few weeks ago – but the camera tricks, like the bobbling when Messi is Sprinting in the adiZero, would be more at home in a new Matrix film than in an advert for football boots!!

Written By
Kyle Elliot
More from Kyle Elliot
Nike's The Chance UK Finalists get to experience the life of a...
Read More