Ahead of their crunch match with Denmark tonight, we’ve been busy rounding up some behind-the-scenes videos with the Portuguese national team out in Poland & Ukraine 2012.

In the first video, we catch up with Portugal at their hotel, where Nike Football staffers are ready to surprise their players with bespoke boots, delivered in some rather classy wooden boxes with the ‘My Time is Now’ slogan emblazoned across the lid.

It offers a pretty nifty look at some of the boots up-close, as Portuguese stars can’t wait to get their Clash Collection cleats on their feet.

In particular, we like Miguel Veloso’s sheer enthusiasm at getting his mitts on the Vapor VIII in White / Solar Red. Clearly a player who loves boots as much as we do!

Despite making a brief-but-memorable cameo in the previous video, you’re probably wondering why Cristiano Ronaldo has been left out by the Nike Football reps in the hotel.

The answer is, as always, Nike have got something a bit special up their sleeves for their star man – as they deliver a C72 Bag of goodies to the Real Madrid forward.

Instead of a pair of boots, however, Ronnie is treated by Nike to an iPad, Nike Fuelband, iPhone and iPod dock – as well as his Portugal training gear! Not bad swag for one of the highest-paid footballers on the planet!

Finally, we get a look into the Portugal changing rooms ahead of a match. This one’s a bit of a cheat, as it’s from one of their warm-up matches ahead of Euro 2012, but as it features the newest Portugal Away Shirt and all the Clash Collection boots, we thought it was worth including anyway.

Despite drawing a tough group, there’s plenty of team spirit in the dressing room, with players swapping shirts to sign and terrible music playing. 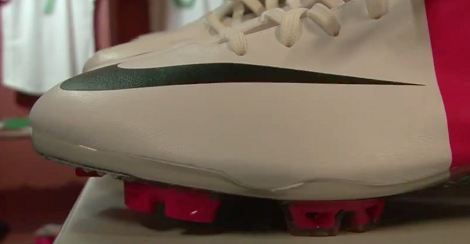 One interesting spot is Cristiano Ronaldo’s bespoke Vapor VIII’s. Despite having hardly ever worn the FG plate on his Superfly II & III’s, Ronaldo clearly found some reason to ask for a pair of boots packing the Vapor VII soleplate.

We haven’t seen him play in them at all, but the former Manchester United man has broken out a pair of Sail/Red Mercurial Vapor VIII‘s with the same plate in training last week.

Whilst we have no concrete evidence, we can only imagine it’s to offer a but more support under the heel on the hard grounds of Portugal’s training pitch.

Written By
Kyle Elliot
More from Kyle Elliot
Warrior have made a savvy move in the UK by forging a...
Read More