In one of the weekend’s more bizarre stories, a Free-kick from FC Bayern Munich’s Daniel van Buyten seemingly smashed the insides out of the adidas ball that was being used.

As you can see from the above video, the veteran Belgian midfielder hammers a free-kick from just outside the FC Koln area – which then takes a huge deflection from the studs of an incoming defender. 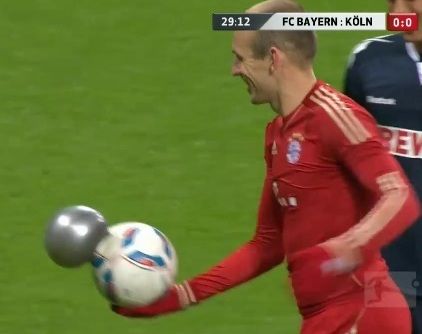 The ball then spirals off course before coming to the feet of Arjen Robben, who decides to hammer the busted ball into the stands, much to the delight of the fans.

As freak occurrences go, destroying the match-ball is certainly unusual – and will certainly cast some unwanted attention on adidas (makers of the matchball; the Torfabrik II) – who have only just revealed the follow-up to the controversial Jabulani; the Tango 12.

Footy-Boots.com had the distinct please of seeing how adidas’ footballs are tested, and we’re pretty confident this one is a complete one-off, that likely has more to do with the velocity of the free-kick, the movement of the defender and hitting a set of studs at a speed likely in the hundreds of kilometres-an-hour at near-point-blank range.

What do you think of the incident?

Written By
Felipe
More from Felipe
Arsenal's signing of Andrei Arshavin has been given the all clear.
Read More